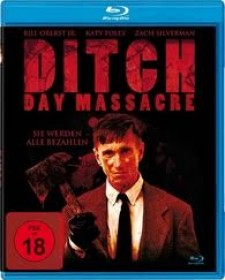 The Blu-ray release follows a successful online release of the award winning film.

Producer Megan Waters commented, "We are thrilled to have been so well received by German horror fans. We aimed to create a film that would entertain and thrill horror fans around the world.”  And it appears they have as Brazil, Korea and the UK are also slated to release the film. Co-producer and writer Dan P. Coughlin offered a toast, “We hope all fans enjoy this day in the life of hell. We aim to bleed. Prost!”

Not only does the cast deliver an entertaining and blood soaked ride, but so does the soundtrack, featuring music from indie band, Swirl who also has a strong German fan base. Swirl’s founder and lead guitar player, DT remarked, “We were honored and thrilled to have 3 of our songs included in the film’s sound track.  We hope fans around the globe enjoy our music and check out our full album.”  (www.swirltheband.com )

For all the updates on the film fans can visit www.DitchDayMassacre.com

Public relations and media support for the arts, entertainment, and technology industries.