Hope and Life Press Announces WHO ARE YOU? WHAT IS YOUR FAITH? AMERICA'S 21st CENTURY ALT-RIGHT AND CATHOLIC SOCIAL DOCTRINE

Maltese-American HLP founder and Catholic author Marcelle Bartolo-Abela challenges American Christians to ask if the Gospel of Trump is compatible to the Gospel of Christ. Using empirical data, she shows how the American people of faith draw the line bounded by devotion to politicians, while violating the fundamental human rights of racial and religious minorities, immigrants, refugees, and women. 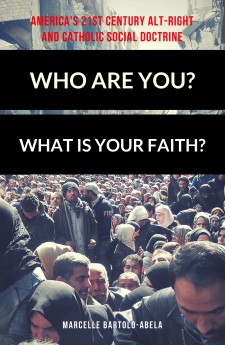 Impressive documentation of systematic discrimination since the foundation of America.

Marcelle Bartolo-Abela is a consultant on the interface of multiculturalism, psychology, spirituality, and the political sphere. A first-generation immigrant to America, she served as a mental health clinician in hospital, community, private practice settings in the Northeast US and Malta. She has lectured on psychology and psychotherapy to psychiatry residents and graduate students in the US, UK, and Malta. She served as consultant to faculty and program managers on the combined provision of multicultural psychology and spirituality services. She also provided advocacy and consultation on free speech rights in relation to criminalization discourses in the legislative agenda First Malta Then the World.

Bartolo-Abela is the author of nine books on the Catholic Faith. She holds a Master of Science in Psychology from Springfield College, the Postgraduate Certificate in Research Methodologies in the Social Sciences from Middlesex University, and the Certificate in Catholic Social Doctrine for Professionals from The Catholic University of America. Bartolo-Abela is a mid-level apprentice in Russian-Byzantine iconography. Her icons can be found in churches and private collections in the US, Italy, and Malta.