HoodPranks the Movie is Set to Premiere 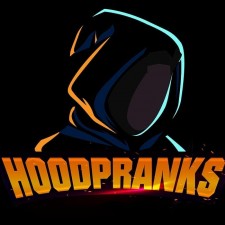 NEW YORK, April 16, 2020 (Newswire.com) - ​​Fam Biz Entertainment announces the digital release of an American comedy film, HoodPranks The Movie at www.hoodpranks.com for everyone’s viewing pleasure on Monday, April 27, 2020. As the next wave of urban comedy, HoodPranks The Movie is a multi format film consisting of pranks, skits, and stand up comedy. Film writer and creator, Fambino Murphy, who along with his cast of cohorts, take to the streets to deliver eleven (11) jaw-dropping scenes. The outrageous pranks are aimed at the urban community’s most notoriously known tough guys who now become unsuspecting victims and the outcomes are hilarious!

Fambino’s inspiration to bring HoodPranks The Movie to the big screen is filled with pre-determined sequences of scripted scares that result in uncontrollable laughter. “I was tired of seeing people in my community looking uptight and angry,” says Fambino. “It was after a friend pulled a prank on me, that I decided we all need to laugh more.” HoodPranks The Movie addresses real issues and stereotypes of the streets while adding special twists to deliver gut-wrenching laughter.

Known for directing music videos for the likes of mega artists such as Brandy and Cardi B, content creator Mark K. Buddington (Money Mark) shot “HoodPranks The Movie” in its entirety with hidden cameras. “Filming this movie provided an unusual and challenging approach, but working on this project was fun and worth it,” states Mark.

Platinum hip-hop artist, Maino, who is also a co-star in the movie says, “HoodPranks is a great concept that gives the viewing audience a chance to see that the hood has a sense of humor. It shows the flip side of the hood and connects those not in tune with the urban community.” Maino also leads the film’s soundtrack with hip-hop single, “We did it for the hood.”

Hip-Hop hall of famer, Erick Sermon also makes a guest appearance in the film. “Bringing laughter to the urban community during this time is extremely important,” states Lynn K. Hobson, Unit Publicist for the film.

Pranks have a universal appeal rooted in their natural ability to both shock and cause viewers to erupt in laughter.

“This film is the hilarious embodiment of alpha personalities under pressure,” states Phya Harris, Associate Producer of the film. “In the movie, we stage cultural issues and satire such as “stop & frisk” with an opportunity to provide a very different spin on perspectives that evoke thought on matters such as this.”

“There’s something both cringe-worthy and hilarious about the movie that will keep viewers tuned in for more,” states Larry Meistrich, Executive Producer.

The film is available for rent or purchase at www.hoodpranks.com

$14.99 to purchase the film with soundtrack.