Hollywood Writer, Sonja Warfield Publishes New Book "Big Fat Negro, Get Your Lazy Ass Off My Couch" (and it's not just about black men) 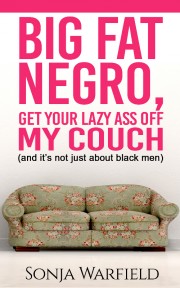 Los Angeles, California , May 14, 2015 (Newswire.com) - Los Angeles, CA – Sonja Warfield is a television comedy writer known for her work on the Emmy Award-Winning NBC comedy, Will & Grace and most recently for the BET comedy, The Game. Ms Warfield has published her first book on Amazon: Big Fat Negro, Get Your Lazy Ass Off My Couch -- a woman’s guide to getting rid of her deadbeat husband, boyfriend or boo thing.

If a woman has a loser on her couch of any ethnicity, she must take responsibility for allowing him to be there. Through Ms. Warfield’s personal stories about her relationships and her post apocalyptic days of dating after divorce, as well as close friends’ dating horror stories, the reader is taken on a witty and uproarious romantic relationship odyssey. In such chapters as: Boys will be Boys is Bulls**t and Self Acceptance Begins With Ass Acceptance women can vicariously laugh at themselves through Ms. Warfield’s relationship drama, while gaining wisdom through a humorous perspective about why we do what we do when we date.

Ms. Warfield also wrote for the ABC comedy Jake in Progress. She has had development deals with Sony Pictures Television that led to her writing pilots for NBC and ABC. Additionally she has written two pilots for HBO. Ms. Warfield also writes feature films and has written an adaption of a novel into a screenplay for Alcon Entertainment and 2S, a Hilary Swank production company.

Currently, she serves as an adjunct professor at The University Of Southern California School of Cinematic Arts where she earned her B.A. in Cinema-Television Critical Studies. Ms. Warfield has been featured on USC Trojanvision http://trojanvision.usc.edu/guests-and-guitars/ LA Talk Radio http://bit.ly/O2qgbw and The Masters virtual summit on YouTube.

Sonja is also the daughter of Paul Warfield, the Hall of Fame football player for the Cleveland Browns and the undefeated Miami Dolphins.