Originally created as an Augmented Reality test project, this magical Tarot Card experience was truly enchanted. Now it's available for iOS and Android users on Google Play and the App Store for use both as a view-through mobile app and in Google Cardboard or Daydream headsets. 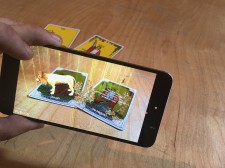 The experience allows users to look at cards from the classic Rider-Waite tarot deck and immediately see the traditional interpretation of the card - many of them with dramatic effects and animation. Since Tarot cards have different interpretations depending on if they’re right-side-up or upside-down, the interpretation changes as the user turns the card. Tarot decks are divided into two main categories or “Arcana” - the Major Arcana, which consists of 21 cards plus “The Fool”, and the Minor Arcana which consists of four 14-card suits. The Augmented Tarot presents the Major Arcana with brilliant magical effects, and the Minor Arcana with more understated glowing borders and descriptions.

Pokémon Go really brought people around - in the days after that game released, I must have gotten a dozen emails and phone calls from people exclaiming, 'Now I get it! That's what you were doing with the Tarot cards!' Finally, they had something in their 'real life' that they could relate it to.

With an early version produced by Eddie Offermann as a “weekend sprint” project in late January 2016, The Augmented Tarot was later demonstrated on YouTube and at several VR events around Los Angeles. It was a big hit even if it wasn’t a full-featured app as Eddie travelled to events for Mirada Studio, showing off their past VR projects, and demonstrating a few of his personal experiments, to expose eventgoers to the possibilities of Augmented and Mixed Reality.

“People said it was really magical,” says think tank founder Eddie Offermann. “I’m not sure most people thought of immediate commercial applications for the technology - augmented reality was too new to most of them - but it got people thinking and it got them to bring their friends back to the Mirada booth so we could talk to them about our work.”

Thanks to the explosion of interest generated by Pokémon Go, people are a lot more familiar with Augmented or “Mixed” reality today. “Pokémon Go really brought people around - in the days after that game released, I must have gotten a dozen emails and phone calls from people exclaiming, ‘Now I get it! That’s what you were doing with the Tarot cards!’ Finally, they had something in their ‘real life’ that they could relate it to,” said Eddie.

After showing off the bare bones version of The Augmented Tarot for months, Eddie decided it was time to package it as a real app. Cramming a handful of late nights and early mornings to get it wrapped up, and adding the ability to easily switch between a “mono” version for use with a cellphone or tablet screen, and a “stereo” version for use in a Google Cardboard or the forthcoming Daydream headsets, it was ready to bring magic into digital devices everywhere.

The Augmented Tarot is available for both iOS and Android.

Big Blue Ceiling is an Extended Reality think tank founded by Eddie Offermann. With visual effects credits on over 40 feature films, and a history in education, defense aerospace and corporate communications, Eddie is a Virtual and Augmented Reality Researcher and Software Architect for Guillermo del Toro’s Mirada Studio, Co-developer of the HoloFlect Augmented Reality Headset Platform, and is focused on creating a new digitally-enhanced world.

Media outlets are invited to review the experience. To request a review copy of the software, please send an email to support@bigblueceiling.com from your company email address with the subject line “REVIEW COPY REQUEST” and indicate if you’d like an Android or iOS review copy or both.

Qi Zero Launches the Mutant Presidents NFT Collection on OpenSea
Talented digital artist, Qi Zero, explores Artificial Intelligence (AI) and Art as he announces the launch of the first of The Mutant Presidents Signature Series, a collection of 46 living paintings of the Presidents of the New States of Mutant America
Big Blue Ceiling - May 2, 2022