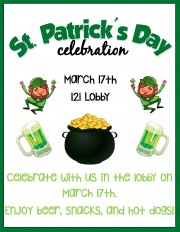 Los Angeles, California , March 15, 2016 (Newswire.com) - Hollywood Production Center loves to get festive during the holidays. And next up on the calendar at both its Glendale locations and the center on Gower Street in Hollywood is St. Patrick’s Day. Thursday, March 17, is the day everyone loves wearing green and being Irish—even if only at heart. It is said that St. Patrick drove all the snakes from Ireland. Well, this year, St. Patrick will be driving away the workweek blues and inspiring all to get up, get out, and mingle with their friends and neighbors. Naturally, the celebration will include plenty of green beer, more than a pinch of fun, shamrocks for days, and snacks aplenty: nachos, pretzels, hot dogs, and more…all potentially green, of course.

Monthly social events at Hollywood Production Center give tenants the chance to step away from their desks and network with other tenants. After all, a better workplace means better work and a more enriching life.

For Location Scouts, It’s Like Finding that Pot of Gold at the End of the Rainbow

Hollywood Production Center is happy to arrange a shoot at any of its four properties. The staff is helpful, professional, and familiar with the requirements of shooting a feature film. As a result, film crews find it easy to set up and film scenes at all of the Glendale and Hollywood locations.

If looking for your next location, you can find more information at www.hollywoodpc.com/filming.