Basil Hoffman has been awarded the Best Actor Award for the Jetlag Pictures feature film, The Pineville Heist by the inaugural Newark International Film Festival. 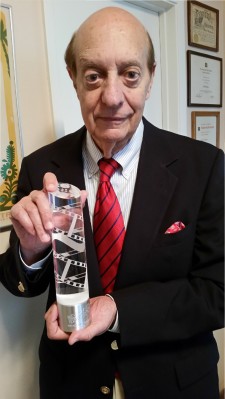 Hoffman, who has worked with eight Academy Award winning directors on movies such as All the President’s Men, Ordinary People and The Artist, played Principal Parker in the adrenaline rushed 80-minute indie thriller about a botched robbery.

"Working with director Lee Chambers was a joy in all respects. I'm grateful for the part and the award."

The debut feature from director Lee Chambers, has been described as “Die Hard for teens” by Good Reads Magazine, with the paperback version of the screenplay selling over 42,000 copies around the world.

“Working with Director Lee Chambers was a joy in all respects,” notes Hoffman. “I’m grateful for the part and the award.”

The cast also includes Carl Bailey from Django Unchained and Wayne Johnson from The Captive.

The movie was produced by Jetlag Pictures with distribution being handled by Black Wolf Media Group and Shoreline Entertainment in the USA.