'Food Insecurity will be a defining issue of our time.' The Bronx has become the new face of hunger, particularly during the holiday season. 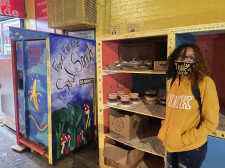 NEW YORK, December 14, 2020 (Newswire.com) - The Think Tank at The Thinkubator under the leadership of Dr. Lessie Branch released a policy brief on holiday food insecurity in the Bronx. The report explores the devastating impact COVID-19 has on the Bronx and on hunger. The report amplifies other reports that coin the Bronx as the new face of hunger. It released data from The Thinkubator on food insecurity during the holiday from nearly 100 Bronx residents representing all zip codes in the borough. The report finds the following:

COVID-19 has certainly exacerbated the number of food insecure households and policy intervention is needed immediately. "Food insecurity will be a defining issue of our time. We must do everything we can to eradicate food insecurity in the Bronx, NYC, nationally, and worldwide," said Dr. Edward Summers, CEO and President of The Thinkubator. The Thinkubator has worked collaboratively with The Bronx Community Foundation, The Bronx Community Relief Efforts, HERE to HERE, World Central Kitchen (WCK), RAP4BRONX, BronxWorks, NY Common Pantry, The Prodigal Center, the Mott Haven Fridge, and other community-based organizations to provide meals and financial resources to support local pantries and food distribution centers. These activities have yielded the delivery of more than two million meals and hundreds of grocery bags and fresh produce to households in the Bronx. "The strength and dedication of our organization have allowed us not only to report out on these inequities we are seeing impact Bronx society, but address them," stated Julian Joyner, Lead Facilitator and Manager of Youth Voice, The Thinkubator.

The Think Tank at The Thinkubator puts forth four policy prescriptions that must be examined as local governments consider food insecurity relief: 1) Continue to facilitate safety precautions for staff and patrons at food distribution locations. 2) Identify successful food outreach practices for K-12 students. 3) Increase benefit resources and subsequent outreach campaigns. 4) Implement innovative food delivery for low-income, elderly populations. Dr. Lessie Branch, Director of The Think Tank, states, "The brink that the Bronx has been ushered to is at the intersection of policy that has ignored the structural barriers and the shift of resources away from those most disparately impacted by structural barriers." The community must do its best to intervene and support those within the community when the government fails to do so.

About The Thinkubator, Inc.

Policy Recommendations for Remote Education in the Bronx
How do we expect children to learn in a remote setting in a system that at its core has grave inequities that disadvantages Bronx youth?
The Thinkubator, Inc. - Dec 1, 2020

The Thinkubator Announces the Launch of Fall 2020 Programs and Think Tank Despite the Impact of COVID-19 and the Uncertainty of School
'Youth talent development is critical now more than ever. We must not miss a beat in preparing our youth for the future, otherwise, we will continue to create a permanent underclass.'
The Thinkubator, Inc. - Oct 8, 2020