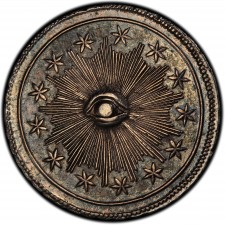 PHILADELPHIA, August 13, 2018 (Newswire.com) - The very first coin ever struck by authority of the United States government will be returning to Philadelphia, Pennsylvania for the first time since its creation in the 1780s. The silver coin was identified in 2017 by historian and president of Kagin's Inc., David J. McCarthy, who has been named 2018 "Numismatist of the Year" by The American Numismatic Association. The unique coin called the "Plain Obverse Quint" was Delivered to the United States Treasury a week after Congress received news that Great Britain recognized U.S. Independence.

The coin will be publicly displayed from August 14 – 18, 2018, at the American Numismatic Association’s World’s Fair of Money (www.WorldsFairofMoney.com), held at the Pennsylvania Convention Center, just blocks from where the unique piece of money was struck in early 1783.

The coin is known as the “Plain Obverse Quint,” and was once in the hands of one of the USA’s Founding Fathers, Alexander Hamilton. It is the historical ancestor of the dollar as well as every coin in the Western world using a decimal monetary system, according to McCarthy, senior numismatist at Kagin’s, Inc., an old-line California-based rare coin dealership (www.kagins.com).

Results of his research on the one-of-a-kind experimental early American coin were published in the August 2017 edition of “The Numismatist,” the official journal of the American Numismatic Association (www.money.org).

“It’s a national treasure that was hiding in plain sight until all the pieces of the puzzle recently came together,” said Donald H. Kagin, Ph.D., President of Kagin’s.

“Although the coin was discovered in 1870, it was misattributed. It is now understood to be ‘the first that has been struck as an American coin,’ as described in the April 2, 1783 diary entry of Founding Father Robert Morris, the government’s first Superintendent of Finance and a signer of the Declaration of Independence,” stated McCarthy.

“The Quint and a subsequent set of coins were created under authority of the Treasury some nine years before the next coins would be struck by the U.S. government,” McCarthy explained.

“This was the first use of the vital and enduring decimal system to be established in the Western world,” stated Kagin.

During the 1770s and 1780s, several states and private individuals manufactured coins, but this is the first coin that was struck and paid for by the U.S. government, according to McCarthy’s research, which a dozen other early American coin experts agreed with before he submitted it for publication.

After examining the evidence, former American Numismatic Association President Jeff Garrett of Lexington, Kentucky stated: “David McCarthy's research makes a compelling case for the 1783 Nova Constellatio Quint being the ‘First American Coin.’ As such, the historical importance of his research and the coin is one of the most exciting developments in modern numismatics!”

Coin researcher and writer John Dannreuther of Memphis, Tennessee, the American Numismatic Association’s 2007 Numismatist of the Year, stated: “The only coin that logically could be the coin referred to in 1783 by U.S. Superintendent of Finance Robert Morris as ‘the first that has been struck as an American coin’ is the Plain Obverse Quint.  The Plain Obverse has to be the first one – thus, it is the first United States coin.”

Only two examples of the 500-unit coin are known, and each is distinctively different on the front. One has the words, NOVA CONSTELLATIO, Latin for “a new constellation,” while the other example does not have any words. The research demonstrates the coin without the words on the obverse was struck first.

After surfacing in New York City nearly 150 years ago, the coin was carefully preserved in several major collections before entering the possession of Johns Hopkins University, where it resided for much of the 20th century. McCarthy’s recent historical research brought together evidence that it was the first coin made by authority of the U.S. government.

Kagin’s acquired the coin at an auction in 2013. McCarthy began researching it through the writings of Morris and Thomas Jefferson, Continental Congress documents, and forensic evidence found on the coins themselves, later consulting with other noted experts in early American numismatics.

Kagin and McCarthy made international headlines in 2014 when they assisted an anonymous California couple who discovered the “Saddle Ridge Hoard,” nearly $10 million of 19th century U.S. gold coins buried in rusting tin cans.

NOTE TO EDITORS: The Latin word below referring to the name of this unique early American coin correctly is CONSTELLATIO (not CONSTELLATION). 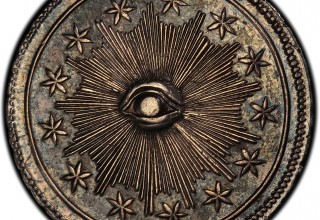 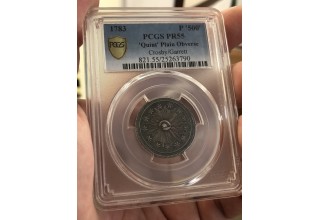