Fans Can Watch the Final Game On-Demand at ESPN.com 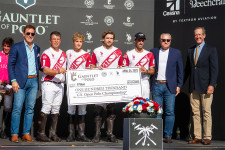 WELLINGTON, Fla., April 26, 2022 (Newswire.com) - U.S. Polo Assn., the official brand of the United States Polo Association, is pleased to announce that the 2022 U.S. Open Polo Championship® has officially closed out the high-goal polo season in Wellington, Florida, the "Winter Equestrian Capital of the World." With record attendance at the International Polo Club (IPC) and watched by millions on ESPN, the U.S. Open Polo Championship celebrated the tradition and heritage of polo for the last game of the season in the United States.

In this, the third leg of the 2022 GAUNTLET OF POLO® series, it was an upset with 2019 GAUNTLET OF POLO winner Team Pilot topping La Elina in a score of 11-6 and taking home $100,000. Played on the U.S. Polo Assn. Stadium Field, the U.S. Open Polo Championship is one of the most historic tournaments in the United States, featuring the sport's finest players, alongside their equine partners from around the world. The thrilling action of the final game was livestreamed exclusively on Global Polo TV (GPTV) and later broadcast on ESPN. It's now available On-Demand at ESPN.com.

"This year the U.S. Open Polo Championship had the largest number of team entries in its history, which really demonstrates how much growth we have seen across the sport in recent years," said Stewart Armstrong, Chairman of the United States Polo Association (USPA). "The ability to broadcast top tournaments like this on ESPN is not only great for the sport itself but also widens our overall audience to generate new fans in the U.S. and around the world."

The GAUNTLET OF POLO series consists of three tournaments, the C.V. Whitney Cup®, the USPA Gold Cup® and the U.S. Open Polo Championship, all played at IPC. In addition to the more than $200,000 in prize money awarded this GAUNTLET season, U.S. Polo Assn. has donated a total of $15,000 to the finalists' charities of choice including the following 501(c)(3) polo-based charities: Polo Players Support Group, Polo Museum, Replay Polo, ELS for Autism Foundation, and Polo Pony Rescue.

"U.S. Polo Assn is proud to partner with the USPA, The International Polo Club and The Palm Beaches to bring polo to as many fans as possible in Palm Beach County, and through our new and outstanding partnership with ESPN," said J. Michael Prince, President and CEO of USPA Global Licensing Inc., which manages the multi-billion-dollar U.S. Polo Assn. brand. "Alongside our partners, we now look forward to the unique opportunity to host the XII FIP World Polo Championships, last held in Australia, right here in Palm Beach County this coming October!"

U.S. Polo Assn. is the official brand of the United States Polo Association (USPA), the nonprofit governing body for the sport of polo in the United States and one of the oldest sports governing bodies, having been founded in 1890. With a multi-billion-dollar global footprint and worldwide distribution through some 1,200 U.S. Polo Assn. retail stores, department stores, sporting goods channels, independent retailers and e-commerce, U.S. Polo Assn. offers apparel for men, women, and children, as well as accessories and footwear in 194 countries worldwide. Ranked the fifth largest sports licensor in License Global magazine's 2020 list of "Top 150 Global Licensors," U.S. Polo Assn. is named alongside such iconic sports brands as the National Football League, the National Basketball Association and Major League Baseball. Visit uspoloassnglobal.com.

USPA Global Licensing Inc. (USPAGL) is the for-profit subsidiary of the USPA and its exclusive worldwide licensor. USPAGL manages the global, multi-billion-dollar U.S. Polo Assn. brand and is the steward of the USPA's intellectual properties, providing the sport with a long-term source of revenue. Through its subsidiary, Global Polo Entertainment (GPE), USPAGL also manages Global Polo TV, the world's leading digital platform with polo and lifestyle content. In addition, USPAGL partners with ESPN and BeIN Sports globally to share the sport of polo broadcasts on television and on-demand to millions of viewers around the world. For more polo content, visit globalpolo.com.

The United States Polo Association was organized and exists for the purposes of promoting the game of polo, coordinating the activities of its Member Clubs and Registered Players, arranging and supervising polo tournaments, competitions and games, and providing rules, handicaps, and conditions for those tournaments, competitions, and games including the safety and welfare of participants and mounts. Founded in 1890, the USPA is the national governing body for the sport of polo. The USPA is currently comprised of almost 200 member clubs with thousands of individual members and oversees 40 national tournaments. For more information, please visit uspolo.org.