The Father of Rapping, Inventor of DJ Scratching & The King of Flyers Finally Get Their Flowers. 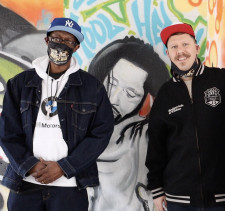 The Induction Ceremony provided a virtual view to the public via social media platforms for fans on Instagram LIVE (HipHopMuseumDC) and Facebook (The Hip-Hop Museum Pop-Up Experience). "It's important that the Hip-Hop Community witnessed history," stated Grandmaster Caz. "The Ceremony not only took place in The Bronx, but it took place in the very same room where the first Hip-Hop party happened in 1973," states Hip-Hop Publicist Lynn Hobson.

Inducted by Historian Jay Quan, these legends were recognized for their contributions to the culture in the very same room where Hip-Hop was born. "I am honored to be a part of history and I appreciate the museum for recognizing my role in Hip-Hop," stated honoree Grand Wizzard Theodore.

During the ceremony, The Hip-Hop Museum of Washington, DC received a donation of the largest collection of rare, vintage Hip-Hop Flyers ever donated to a museum. All designed by the 'King of Hip-Hop Flyers' Buddy Esquire who passed away in 2014, this lot of 157 flyers came directly from his personal archive and are in pristine condition. At the direction of Johan Kugelberg who was Buddy's friend and Biographer, the legends took us on a stroll down memory lane as they recalled some of the historic moments from the early days of Hip-Hop's inception.

"Hip-Hop has now grown into the largest financial and cultural export the United States has ever produced. The importance of this donation and the enormity of this induction ceremony, is deeply meaningful for reasons of cultural preservation and legacy," states Museum Founder Jeremy Beaver.

Hip-Hop is a culture and art movement that was created by African Americans, Latino Americans and Caribbean Americans in the Bronx, New York City. Like any style of music, hip-hop has roots in other forms, and its evolution was shaped by many different artists, but there's a case to be made that it came to life precisely on August 11, 1973, at a birthday party in the recreation room of an apartment building in The Bronx. The location of that birthplace was 1520 Sedgwick Avenue, and the man who presided over that historic party was the birthday girl's brother, Clive Campbell—known as DJ Kool Herc, founding father of hip-hop and Coke La Rock, founding father of rapping. Together, the two created Hip-Hop.

The Hip-Hop Museum of DC Held Induction Ceremony at the Birth Place of Hip-Hop
The Father of Rapping, Inventor of DJ Scratching & The King of Flyers Finally Get Their Flowers.
MoneyLynn PR - Mar 4, 2021