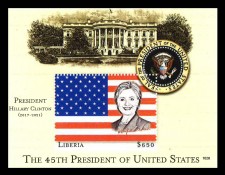 New York, NY, February 14, 2017 (Newswire.com) - Anglo American Appraisal Services reports that the Hillary Clinton Postage Stamp as the 45th President of the United States is to be withdrawn.

Having anticipated a victory by Hillary Clinton, the country wanted to be the first to commemorate this historic event, a woman elected as the 45th President of the United States, with a postage stamp to be issued on the day of her Inauguration.

Unfortunately for the Post Office in Liberia, the election did not turn out as anticipated and Donald Trump was the winner. The stamps have been withdrawn. The few that have survived could be very much in demand as “Non-Issued” stamps for collectors.

You can bid on this, the Clinton Stamp, as the 45th President of the United States at http://stores.angloamericanappraisal.com or on eBay at http://www.ebay.com/itm/Liberia-stamps-2017-rare-unissued-Hilary-Clinton-45th-Pressident-stamp-/381960301408?ssPageName=STRK:MESE:IT

Consulting, Creative Entrepreneurs helping companies in the US and Abroad along the path to Incorporation.