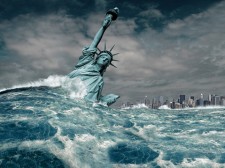 New York, NY, April 19, 2017 (Newswire.com) - “The risk of asteroid impacts on Earth is much higher than assumed by many in the scientific community,” warns chemist Hugh Miller, director of the International Paleo-chronology Group (IPG).  “Surprise asteroid encounters such as the explosion over Chelyabinsk, Russia on February 15, 2013, are a tremendous wake-up call.  But discoveries by Dr. Dallas Abbott and associates at Columbia University of an ocean-floor impact 2,400 years ago near New Jersey that sent a flood up the Hudson River, and 4,800 years ago near Madagascar reveal an estimated 500 times increased risk factor.”  There are 185 known impact craters on land, and many more certainly struck the oceans, which cover 70% of Earth’s surface.  Abbott’s group identified evidence of over 220 coastal tsunamis that could be caused by ocean impacts.

NASA Administrator Charles Bolden was asked during the House Science, Space and Technology Committee hearing on March 19, 2013 what could be done if an asteroid is detected heading towards Earth with only three weeks warning.  "If it's coming in three weeks ... pray," Bolden said.  "The reason I can't do anything in the next three weeks is because for decades we have put it off."  In a NASA panel discussion on the Asteroid Redirect Mission on September 14, 2016, the Science Advisor to President Obama, John P. Holdren, doctor of aerospace engineering and physics, advised, “We have to be smarter than the dinosaurs.”

“The risk factor could actually be up to 2000 times greater than what NASA expects,” Miller says,“ due to evidence of a more recent demise of most dinosaurs than the 65 million years assumed for the Chicxulub meteorite impact.  How can there be such an age gap between dinosaurs and man when there are hundreds of accurate dinosaur depictions worldwide made by our ancestors?  How could soft tissue and collagen protein last 65 to 197 million years in some dinosaur bones, and Carbon-14 in all bones studied (including Triceratops, Hadrosaurus, Acrocanthosaurus, Allosaurus and Stegosaurus, yielding ages of only thousands of years) – discoveries that have been confirmed by several teams of scientists including the IPG. This re-writes the age of impact craters.”

“Flume experiments and field studies by many modern geologists demonstrate how the thick and vast sedimentary deposits such as one finds in the Grand Canyon were deposited by rapidly flowing waters before hardening into sandstone and limestone,” according to Guy Berthault, French sedimentologist and advisor to IPG.

Miller maintained, “If most dinosaurs became extinct due to one or more asteroid or comet impacts on Earth then we too are targets in a shooting gallery, and it behooves the U.S. and other governments to provide the funds necessary to expedite a viable defense against mass killers from space.”

“A few initiatives have begun by space scientists who see the threat are grossly underfunded,” he notes, “such as the gravity tractor planned by NASA and the Hypervelocity Asteroid Intercept Vehicle conceived by the Emergency Asteroid Defense Program at Iowa State University.  Over a million small and medium size asteroids now orbiting near the Earth are a far greater risk to humanity than climate change, over which we have little more control than did our ancestors during the Medieval Climate Anomaly and Little Ice Age that followed later.”

Current estimates have asteroid 2012-TC-4 missing Earth by 3% of the distance to the Moon on October 12, 2017.  It may be half to twice the size of the Chelyabinsk meteor.  Should the orbital estimates be off, it could explode above ground with the force of six Hiroshima atomic bombs.

Summing up, Miller said, “If an asteroid one kilometer in diameter crashed into a landmass or ocean we could witness not only huge loss of life but a drastically altered climate, even nuclear winter.  This is a global threat.  Nations should pool their resources for protection against Near-Earth Objects.”

“The research shows it’s just a matter of time till the next encounter, and far less than most people think.  As Congress begins writing the next national budget soon, this must be included as national defense.  Pay now or pray later.”

Read more at http://www.spaceflightinsider.com/organizations/nasa/nasa-provides-update-asteroid-redirect-mission/#6lME4azz5eCyahhW.99. and