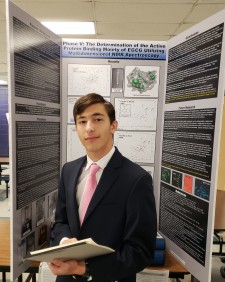 MARIETTA, Ga., February 18, 2020 (Newswire.com) - Stephen Litt, a sophomore enrolled in the Kennesaw Mountain High School Academy of Mathematics, Science and Technology (Magnet program), exhibited his updated, Phase V research, at the Cobb-Paulding Science Fair. The student's research made national headlines three years ago when he proved that cancerous tumors could be prevented in planarian worms exposed to the green tea antioxidant, EGCG. Now, he has taken his research a step further.

Last year, Phase IV of the research proved that EGCG causes human Breast and Cervical cancer cells to cease functioning, while normal breast cells remained unaffected by EGCG. This year, in Phase V, Litt's research delved into, and elucidated, the mechanism by which EGCG may be functioning. Using advanced techniques and instrumentation at Kennesaw State University, Litt identified the portion of the EGCG molecule that binds to a specific protein. Litt has now advanced the research to the point of understanding how EGCG may function, which opens up the door to the potential for customized drug design, thusly targeting specific types of cancer and bacterial diseases after protein analysis.

As a result of his research, Litt earned a first-place award, the top High School project award and a coveted spot for the second year in a row as a finalist at the Regeneron International Science and Engineering Fair to be held in Anaheim, California on May 10-15, 2020. The Regeneron International Science and Engineering Fair (ISEF), a program of Society for Science & the Public (the Society), is the world’s largest international pre-college science competition.

Each year, approximately 1,800 high school students from more than 75 countries, regions, and territories are awarded the opportunity to showcase their independent research and compete for on average $4 million in prizes. Millions of students worldwide compete each year in local and school-sponsored science fairs; the winners of these events go on to participate in Society-affiliated regional and state fairs from which the best win the opportunity to attend ISEF. The competition unites top young scientific minds, showcasing their talents on an international stage, where doctoral-level scientists review and judge their work.

In May, Stephen will represent Kennesaw Mountain High School and the Cobb County School District at the ISEF competition in Anaheim, CA. For more information visit: https://egcg.home.blog