70 percent of students with a prior score improved an average of +3.07 composite points 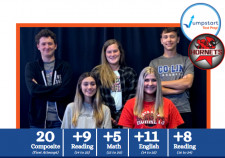 Kristin King, an English teacher at Loyd Star who taught the Jumpstart program, says, "As a teacher, I really liked the Jumpstart program and think it's a great review where students could write down basic stuff that they might have forgotten or may have never heard." King continued, "The program was really well-organized and flowed from one skill to the next. It really helped the kids." Dena Ford, Principal at Loyd Star, shared, "Our team strives to help students perform their best and we are very proud of our teachers and students for their efforts and results."

Several students also provided their thoughts about the Jumpstart ACT review program they completed before the state-mandated February test date. On her second ACT® attempt, Loyd Star junior Madison Falvey improved her English sub-score +11 points and her composite score +9 points. Falvey commented, "Jumpstart made the difference by helping with the small details." Falvey offered that she has really bad test anxiety that the review helped to alleviate. "Jumpstart helped me with time management skills and to calm down and focus on what I had to do. Instead of taking it as one more thing I had to do at school, I just really paid attention and it helped me a lot." She tells future students, "It might seem like it's just another thing to do, but it really will help you." Loyd Star junior Hunter Williams, who achieved a 20-composite score on his first ACT® attempt, commented, "Jumpstart made the difference because it went over a lot of stuff from the past." Junior Haley McCullough agrees, as her Math sub-score rose +5 points over her prior attempt. "What really helped was going over some of the things I hadn't seen. With COVID, last year was cut short and we didn't have a lot of Geometry and the Jumpstart program went back over a lot of that and I saw it on the ACT®." Riley Easterling, another junior at Loyd Star who saw a +8 improvement in his Reading sub-score, agreed. "Jumpstart really helped because it went over stuff I haven't seen since several grades ago." Wednesday Warren, who saw an increase of +9 points in her Reading sub-score, commented, "The presenters really explained everything well. Jumpstart made the difference because it helped improve my time-management skills."

Jumpstart Test Prep is an online review program based on over 60 years of work by Dot McClendon, a legendary educator and Mississippi's 19-year STAR teacher hall-of-fame inductee. "As a teacher at The Mississippi School of the Arts and several other schools during my career, I was able to help guide the preparation of students in person," said McClendon. "Now, through our online, on-demand video review, students in Loyd Star classrooms, as well as classrooms around the country, around the breakfast table or on the couch at home, are able to benefit from our approach."

All juniors at Loyd Star had access to the following resources: