LOUISVILLE, Ky., May 21, 2020 (Newswire.com) - The Louisville personal injury lawyers, Hessig & Pohl, now famous for their “502-777-1111” commercial which has gone viral with almost a quarter of a million views on YouTube, as well as the firm’s recently released kids commercial, which has been played 30,000 times on YouTube and Facebook, is sponsoring the University of Louisville's 1980 NCAA Championship TV Event. The event will air on NBC WAVE 3 starting at 7 pm this Saturday, May 23, 2020.

Flash back to 1980: AC/DC, Queen, Journey, the Sugarhill Gang, and the NCAA champs the Louisville Cardinals. That year, The UCLA Bruins were cruisin’ for a bruisin’ and (spoiler alert!) the Cardinals came through to claim the championship with a bodacious 59 to 54 victory. Thanks to Hessig & Pohl, fans can relive the glory by watching the 40th anniversary special.

It should come as no surprise to anyone who has seen the Hessig & Pohl’s catchy commercials that the Kentucky injury lawyers at Hessig & Pohl love the 80s. And what better way to celebrate that love than to host a funky fresh TV special dedicated to the 40th anniversary of the first time their beloved Cardinals claimed the NCAA Championship.

Coverage of the 40th Anniversary Special: University of Louisville's 1980 NCAA Championship will begin this Saturday evening, May 23, 2020 at 7 p.m. on NBC WAVE 3. Kent Taylor will MC the pre-game show and the game will be aired immediately after. So, dig your legwarmers out of the closet, gather up your matching denim outfit, find the old boombox in the garage and get ready to celebrate the 40th Anniversary of the Cardinals’ first NCAA Championship with Hessig & Pohl.

The Louisville personal injury lawyers at Hessig & Pohl represent injury victims in all types of claims, helping them obtain the compensation that they need to move on with their lives. Hessig & Pohl attorneys handle cases throughout Kentucky, including in Lexington, Elizabethtown and Louisville.

To learn more about how the skilled attorneys at Hessig & Pohl can help you pursue a claim for compensation based on the injuries you have sustained, visit https://www.hessigandpohl.com. 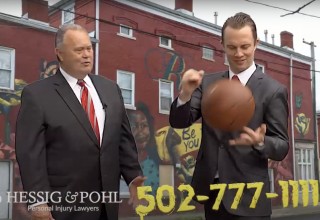