Getting the summer off to a drug-free start in Cheyenne, Wyoming. 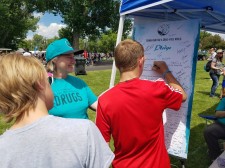 Visitors were relieved to know about the foundation’s program to counter the city’s heroin and methamphetamine problem — fact-based drug education. For the past three years, the foundation has been providing educational materials to local middle schools and high schools.

Known as the Truth About Drugs initiative, the program consists of booklets, public service announcements and a feature-length documentary film. Its Educator Package, including an educator’s guide and all materials needed to conduct drug education classes, is available free of charge to anyone interested in helping others learn the truth about drugs.

Throughout the day, children and teens came to the booth to pledge to live a drug-free life and help others make the same commitment.

One parent told volunteers how happy she was that the Drug-Free World pledge helps young children make their own decision not to use drugs early in their lives.

Eager to have copies of the booklets, another visitor to the booth told the volunteers her granddaughter lives with her because the parents, addicted to drugs, are incapable of adequately caring for her. The woman wants to make sure the child understands what drugs are and what they do, and she plans to use the booklets to help her make the self-determined decision to steer clear of drugs.

“It was wonderful to see the children spending time with their parents at this great event put on by the city of Cheyenne,” said one of the Drug-Free World volunteers. “There is much more work to be done to prevent generations of children from using and abusing drugs. Education is key.”

The Church of Scientology and its members support the Foundation for a Drug-Free World, a secular nonprofit corporation that empowers youth and adults with factual information about drugs so they can make informed decisions to live drug-free. The foundation's Truth About Drugs campaign is one of the world’s largest nongovernmental drug education and prevention initiatives. As shown on a program on the Scientology TV Network, this support makes it possible for the foundation to provide drug education booklets, videos and educator guides free of charge to teachers, mentors and civic and community leaders.