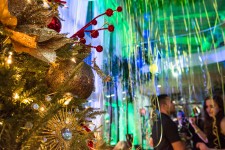 Miami Beach, December 17, 2018 (Newswire.com) - There are many reasons why Miami Beach is consistently one of the world's hottest places to spend New Year's Eve. It could be the People-magazine worthy mix of celebs, reality stars, and assorted bold-faced names who come down to party like it's 1999, or it could just be the fact that the weather's 99% better than most places in late December. The Catalina Hotel guests soaking up the sunshine poolside can attest to that. But back to partying, which is always easier in warm weather, and for proof of that, just turn on New Year's Rockin' Eve to watch Ryan Seacrest's perma-smile frozen in zero-degree Times Square. If there was an official sport of Miami Beach, it could very well be partying over paddle boarding depending on the person, of course.

And speaking of Times Square, Bayfront Park could very well be considered to be Miami's own Times Square, located in the center of downtown Miami and overlooking that magnificent, magical waterfront. On New Year's Eve, that park belongs to Pitbull, a big orange that descends from a building at midnight (that that, Times Square ball), and pretty much anyone else who wants to ring in the New Year with Mr. 305 and his famous friends at Miami's most popular-and free New Year's Eve celebration. Pitbull's New Year's Revolution and the Big Orange Miami New Year's celebrations are understandably two of the city's most attended parties.

If there was an official sport of Miami Beach, it could very well be partying over paddle boarding depending on the person, of course.

For those who don't dig crowds, there are plenty of other options, from poolside concerts such as the one at the Fontainebleau featuring Colombian reggaeton hitmaker J Balvin and Swedish DJ Alesso, and a New Year's yacht cruise on the South Beach Lady along the Intracoastal, to all sorts of non-stop nightclub New Year's action at all night discos such as the iconic Club Space in downtown Miami where dance music royalty Marco Carola and Jamie Jones will spin celebrators straight into 2019.

Down in Wynwood at the Mana Wynwood Convention Center, a great big block party free and open to the public, and on South Beach at the newly opened Taco Taco at the Catalina Hotel, a Mexican fiesta featuring music, performers, open bar, buffet and more with ticket prices that won't break the 2019 budget. Another party perk for those who like to ring in the New Year with their entire families: the Taco Taco New Year's Eve bash welcomes children, who go free if they're under 12. A kid-friendly New Year's Eve to some may be more important than Kardashian sightings, which are also typically aplenty during these celebratory times in Miami.

Those attending the Taco Taco fiesta or pretty much any party in Miami are encouraged to reserve a room to avoid the inevitable New Year's Eve traffic because no one wants to be stuck in a car for the first few hours of 2019. Best bets for those looking for a place to sleep into 2019 include the Catalina - location, location, location - and its sister South Beach property, the Riviera, where plush bedding will ensure a restful first night of 2019 - that is, depending on how much of the open bar is consumed.