The Rome chapter of The Way to Happiness Foundation transformed a derelict stretch of road into a garden as part of its program to safeguard and improve the environment. The group's activities are coordinated by the Church of Scientology of Rome. 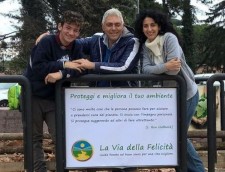 Rome, Italy, January 11, 2017 (Newswire.com) - As in other Scientology Churches around the world, the Church of Scientology of Rome sponsors a chapter of The Way to Happiness Foundation that carries out community cleanups in keeping with precept 12 of the nonreligious, common-sense moral code, “Safeguard and improve your environment.” The volunteers adopted a stretch of road and brought it back to life.​

As they worked on the project, carting out litter, debris and weeds, local residents joined in, including a young man who confessed he had contributed to making the traffic island an eyesore and was relieved that someone was taking on the project.

The young man’s mother later contacted the Church, delighted that someone was helping to channel her son’s energies into something constructive.

The Way to Happiness was written in 1981. Immensely popular since its first publication, the campaign has been embraced by more than 250,000 groups and individuals, with some 115 million copies distributed in 115 languages in 186 nations.

Source: Church of Scientology of Rome