When a big bear has doubts he can ever be as fast as his friends, he learns that practice and believing in himself will help him reach his dreams 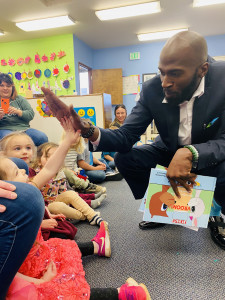 SAN DIEGO, May 17, 2022 (Newswire.com) - Young Barry the Bear has a need for speed. What he doesn't need is friends telling him that he's too big to be fast and won't ever be able to win the big race. With some positive guidance from a new monkey friend, Barry learns that anything is possible if he puts his mind to it. VROOM! Barry, Kari and the Power Boost is beautifully written and illustrated by William G. Wilberforce III, a personal health coach whose mission is to "serve and help people believe that what they want is possible."

Kari the rabbit teased that Barry, a bear, was too big for rollerblades. Determined to prove his friend wrong, Barry donned the skates but immediately fell flat on his face while the other animals around him laughed, to Barry's great embarrassment. This made Barry feel very small.

While his other friends tried to buoy his spirits, Barry started to believe that he would never be fast like Kari. Then he meets Fast Tommy, a monkey who is practicing for an upcoming race, who tells him to meet him the next day for some tips on how to be fast like him.

The next day, Barry has doubts that Fast Tommy will be able to help him. What if he can't skate right away, falls down,  or doesn't win the race? Tommy tells him to only focus on what he can control now - how hard he works at it, taking baby steps, and having a positive attitude.

When Barry tries to skate, he falls…again and again. He falls so much that it's all he can think about, which Tommy says is the problem: "If we keep thinking about falling, we'll fall! There's something good out of every fall. Let's just think about pushing one foot in front of the other."

With steady practice, believing he can do it, and a secret "weapon" he learns from Tommy - the Power Boost - Barry is ready for the upcoming race…and what happens at the finish line surprises both Kari and himself.

Author and illustrator William G. Wilberforce III masterfully weaves a playful modern-day fable that is brimming with lessons of self-confidence, determination, and positivity. In his debut, Wilberforce skillfully uses his background as a health coach and life trainer to share with young readers the importance of believing in oneself, focusing on what you can control in your life, and remaining positive and hopeful. Families and educators of young children will welcome the invitation for discussion that this joyful book brings.

If you would like more information about William G. Wilberforce III, please contact willwilberforce@icloud.com or visit www.williamwilberforceiii.com.