"Laws of Faith" Addresses The Most Crucial Issues of Our Time 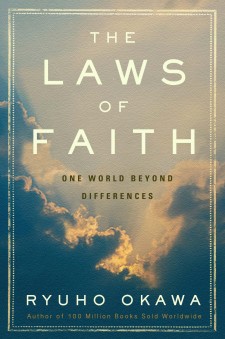 NEW YORK, May 2, 2018 (Newswire.com) - Since the immemorial, religion has played a central role in the shaping of human history, and faith has always been the anchor of the mind for individuals. However, the recent advancement of civilization has brought about a flood of information and a jumble of values, which led many people to lose sight of their faith. This trend seems to be further accelerated by the fact that traditional religions like Christianity and Islam have not been able to provide convincing answers to modern-day issues such as religious conflicts and terrorist attacks, arms race, nuclear war crisis, immigrants and refugees, social welfare, and political or economic chaos.

Today, many people are asking such questions as: “Does God really exist?” “If God exists, why does He not prevent war or eliminate poverty and suffering?” “Why do religions clash with one another?” “Why do people discriminate against others?”

Founder and CEO of Happy Science and Spiritual Leader

To offer answers to these questions, renowned spiritual leader and best-selling author Ryuho Okawa and the founder of the Happy Science movements has published “The Laws of Faith: One World Beyond Differences” (2018, ISBN: 978-1942125-34-1). “Laws of Faith” is the latest in the Okawa’s annual “Laws” series. The book addresses the heart of current issues and offers solutions from the integrated perspective of rational and spiritual reasoning. Okawa shares the truth of a deep spiritual connection among different religions to cultivate a shared understanding which, he says, will lead to solving entailed issues caused by misunderstanding.

“These are the Words of God who create you,” writes Okawa. “These are the Words of God — the God of ancient Africa, the Middle East and India, and the God who appears in the Old Testament and the New Testament, and in the Koran. These are also the Words of the Supreme God Shangdi, the 5,000 years of Chinese history, the God who existed since pre-Kajiki times in Japanese Shinto, and the God known as Odin, the father of Mighty Thor and Loki in Northern Europe. This God is also the God of North and South America. The one and only Supreme God who stands above various ethnic gods and diverse gods — He is the highest God of the Earth who was once called ‘Alpha,’ once known as ‘Elohim,’ and is now known as ‘El Cantare.’”

The following quotes are from this groundbreaking book that mixes religion, spirituality, politics, International relations, economics and self-development.

“The power to believe truly has a physical power.” — Chapter 1

“I believe hatred must be overcome by love. What the world needs now is love.” — Chapter 2

“There is another world after we die. The other world truly exists. I guarantee you 100 percent that it exists.” — Chapter 3

“I am now trying to clarify what lies at the root of all world religions in order to eradicate all conflicts from the world.” — Chapter 4

“The new Genesis of Earth is about to begin right now. Be keenly aware of this.” — Chapter 5

“Humankind must learn the Worlds of the True God, overcome their differences, reconcile and harmonize, and strive to evolve and develop.” — Chapter 6

As we approach a turning point in human history, the times has come when we need to overcome differences and seek the path to creating a world of peace and prosperity. “Laws of Faith” offers the key to uniting the world beyond differences in ethnicity, religion and race. When we turn the key to opening a new future based on shared faith, we can achieve harmony among individuals and nations.

In 1986, after working on Wall Street, Okawa founded Happy Science as a spiritual movement dedicated to bringing greater happiness to humankind by uniting religions and cultures to live in harmony. Today he is the CEO of Happy Science. Happy Science has grown rapidly from its beginnings in Japan to a worldwide organization with centers in North America, South America, Europe, Asia and Canada and over 12 million followers. The spiritual workshops Happy Science offers are open to people of all faiths and walks of life and are rooted in the same simple principles of happiness that inspired Okawa’s own spiritual awakening. Okawa is compassionately committed to the spiritual growth of others. In addition to writing and publishing books, he continues to give lectures around the world. In addition to promoting spiritual growth, Okawa has also dedicated himself to improving society and creating a better world. As affiliates of the Happy Science Group, he has founded various institutions including boarding schools, a higher education institution, a preschool education institution, as well as a publishing company, a political party, a talent agency, and a talent school. In 2017, Ryuho Okawa lectured to 50,000 people at the Tokyo Dome.

IRH Press USA is distributed by Continental Sales and NBN Canada. Since joining with Continental two years ago, distribution in the United States has increased significantly. IRH Press USA is represented by Newman Communications for publicity, marketing and sales coordination.

“Laws of Faith” is available at better bookstores nationwide and online providers including amazon.com and barnesandnoble.com.

With Over 100 Million Copies of Books Sold, Best-Selling Author Ryuho Okawa Offers His Readers in the United States New Perspectives to Get Through Tough Times, Achieve True Happiness, and Create a Better World
Renowned Spiritual Leader Takes Readers From Unhappiness to Healing to Invincible Thinking and on to the Starting Point to Happiness
Bob.Newman@Newmancom.com - Feb 28, 2018
IRH Press USA, the 2017 Breakout Small Publisher of the Year, Is Connecting Renowned Japanese Author and Spiritual Leader Ryuho Okawa to the West
Bob.Newman@Newmancom.com - Dec 7, 2017
Newswire