Planned as a tribute to the life of rapper, entrepreneur, and community activist Nipsy Hussle, the United in Peace Foundation New York Walk for Peace also marched in solidarity with the families of the victims of the Virginia Beach mass shooting. 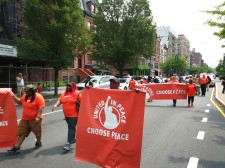 NEW YORK, June 8, 2019 (Newswire.com) - ​The New York Chapter of United in Peace Foundation took to the streets against gun violence June 1. Activists, clergy, celebrities, and concerned community members came together for the “Peace in the Streets” March in Harlem that began on 110th Street and Lenox Avenue and ended at 151st Street and 7th Avenue.

United in Peace Foundation has organized monthly Peace Rides with biker clubs in and around Los Angeles since October 2012. In 2017, the movement expanded to New York, with a chapter formed in Harlem.

Saturday’s march, bringing the community together for peace and unity and against gun violence, was held in response to the senseless killing of Nipsey Hussle March 31 and shootings and acts of violence in the streets of New York and across the United States. Those participating also marched in solidarity with the families of the victims of the Virginia Beach attack that took place just the day before.

The march was intended as a message to communities across the country: “We will not allow the normalization of violence in our communities.”

United In Peace volunteers handing out copies of the Million Man March Pledge of 1995, and The Way to Happiness Booklet. 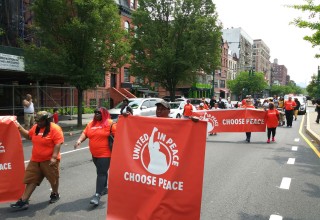 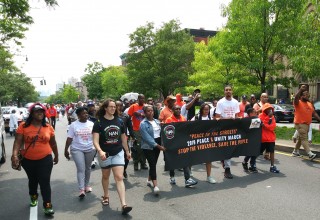 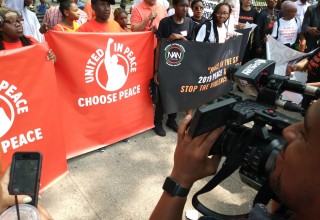 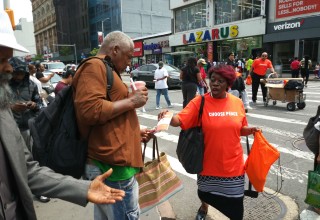