Happy to Help Puerto Rico in Its Time of Need

Back home after two months on the Puerto Rico Disaster Response Team, two new Scientology Volunteer Ministers describe the experience and why they decided to go. 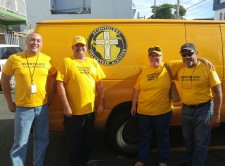 CLEARWATER, Fla., March 1, 2018 (Newswire.com) - Scientology Volunteer Ministers Mark Ruff and Trish Williams returned to Clearwater this month after providing disaster relief in Puerto Rico in December and January. The couple traveled throughout the island, even up into the mountains where the roads were almost impassable, helping people who are still without power and other basic resources.

“We met an elderly couple who looked like they had been living in the woods — they had no food, no water, and minimal shelter,” says Trish. “We provided them with these things as well as an inflated air mattress and a propane camping stove. They were so happy and it made us happy. We met so many people like this.”

In 2016, Mark and Trish had their own life struggles when relocating from Maine to get a new start in Clearwater. Staying in motels as they searched for jobs, their funds were eventually exhausted and they ended up on the street.

One day, they passed by the Scientology Volunteer Ministers Center in downtown Clearwater, went in, learned life skills, and were given the support they needed to find work and a place to stay.

Inspired by the help they received, when Hurricane Maria ripped into Puerto Rico, Trish and Mark decided to join the disaster response team. As a trained EMT licensed to operate heavy machinery, Mark’s skills were very much needed on the devastated island.

“When times get tough out in the world, it’s important to lend a helping hand,” he says.

In creating the Volunteer Ministers program, L. Ron Hubbard wrote, “If one does not like the crime, cruelty, injustice and violence of this society, he can do something about it. He can become a Volunteer Minister and help civilize it, bring it conscience and kindness and love and freedom from travail by instilling into it trust, decency, honesty and tolerance.”