H. Melvin James's New Book 'Tares Among the Wheat' is a Mystifying Tale of a Woman's Lineage Abound With Mystery and Poignancy 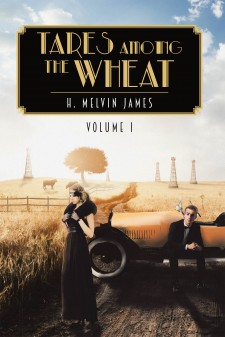 NEW YORK, November 18, 2019 (Newswire.com) - H. Melvin James, a dedicated writer from Oklahoma, has completed his most recent book “Tares Among the Wheat”: a gripping story of a woman’s journey through her past that is fraught with secrets and enigma. The novel includes framed storylines of interest and appeal, equally to men and women, from late teens through centenarians.

James writes, “Superstition, mysticism, and religion weave like tangled vines through the tales of Amelia’s newly discovered ancestry. As a widow struggling to sustain herself and her ten-year-old son, Amy’s modest life is tragically disrupted when a dubious lawyer determines her late mother, adopted at birth, was the estranged daughter of the recently deceased Lexington McClary. Although the net worth of the once enormous estate is petty, Amy decides to travel several hundred miles to attend the funeral, in the hope of at least learning a semblance of her newfound ancestry.

After the interment, alone in the secluded rural cemetery, Amy trips and bashes her head against a tombstone, suffering a coma and complications requiring medical care and convalescence for several months. While precariously recovering, Amy is visited in the depth of nights by a mysterious woman who tells stories of Amy’s maternal grandparents, their families, and acquaintances. The tales of her ancestors reach back nearly a century and include their immigration from Ireland to New York City and their migration westward to Indian Territory.

Poignant remembrances of her own life and the altered world into which she regains consciousness portray the unconquerable but elusive spirit, confronting failure in the wake of triumph, tragedy dispelling romance, madness shaming war of its glory, and the cruelty of murder in defiance of reason.”

Published by Fulton Books, H. Melvin James’s book follows the overwhelming emotional life of a woman who traces her ancestry and discovers riddling and dangerous circumstances surrounding her past.

Readers will be captivated by the dramatic turn of events the protagonist faces as she retraces her origins with unbridled determination.

Readers who wish to experience this engrossing work can purchase “Tares among the Wheat” at bookstores everywhere, or online at the Apple iTunes store, Amazon, Google Play or Barnes and Noble.

Joyce Zeledonis's New Book 'Those Black Roses' is a Riveting Novel of a Woman Caught in a Path of Intrigue and Danger in Her Life
Fulton Books - Sep 18, 2020

John Bowermaster's New Book 'An LA Cop: From the Jungles of Vietnam to the Streets of Hollywood' is a Thrilling Novel Filled With the Life-Changing Battles on the Front Lines
Fulton Books - Sep 16, 2020
Newswire