Unique in the manner that Jackson Pollock has many tantalizing clues to its origin. 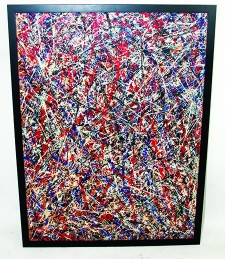 GREENWICH, Conn., February 22, 2018 (Newswire.com) - Greenwich Auction & Connecticut Antique Center will be offering a Drip painting attributed to Jackson Pollock (January 28, 1912 – August 11, 1956), widely considered one of the most influential artists of the 20th-century at their auction this Sunday.

Although not fully authenticated, the painting and its back have many tantalizing clues that point towards its origin. The painting reflects the unique characteristics and chosen paints corresponding directly to Pollock’s drip paintings executed during the late 1940’s. Discoloration of the paint would be expected from a painting that is perhaps sixty-five years old.

The painting is executed on wallboard (also known as sheetrock). Research has indicated that Pollock would gather unwanted scraps of wallboard/sheetrock from contractors which he used as canvases.

The painting approximately 42 ¼ x 32 ¼. On the reverse are several written clues that could point to its authentication.

David Johnson, owner of the auction house stated: “It wouldn't be the first time a Jackson Pollock was discovered in obscurity. Before he became one of the most famous artists in the world, many of his paintings were lost. I just love the idea that someone will be able to have a possible Pollock hanging in their home for a fraction of the cost. This will be a fun auction!”

The owner purchased the painting in the mid-1970’s at a warehouse sale in Norwalk, Connecticut. It should be noted that Jackson Pollock had family members that resided in Connecticut at that time as well. In 1948 Pollock tried to trade several of his paintings to an airplane pilot to fly him to Connecticut. However, the pilot told him “Planes’ burn gas to fly not paintings”. Perhaps this is one of those paintings.

Jackson Pollock was relatively an unknown artist until 1949 when Life magazine’s headlines read “Is he the greatest painter in the United States?” This is believed to be the starting point for Pollock’s introduction to the American people and his controversial career.

Jackson Pollock today is widely considered the most challenging and influential American artist of the twentieth century. In his revolutionary painting of the late 1940’s, he dripped or poured paint into complex webs of interlacing lines, rhythmically punctuated by pools of color. With their all-over composition, seemingly total abstraction, and gestural but remarkably controlled handling of paint, these powerful works announced the emergence of Abstract Expressionism.

Pollock suggested that viewers “look passively and try to receive what the painting has to offer and not bring a subject matter or preconceived idea of what they are to look for. Pollock’s wife, Lee Krasner, said “he used to give his pictures conventional titles… but now he simply numbers them, Numbers are neutral they make people look at a picture for what it is, pure painting.”

On November 2006 Jackson Pollock’s “Number 5’ drip painting” sold for a shocking $140 million dollars. It is suggested that prices for his drip paintings will continue to rise because of their scarcity.

For more information on Greenwich Auction please visit their website: www.GreenwichAuction.net or call 203-355-9335. 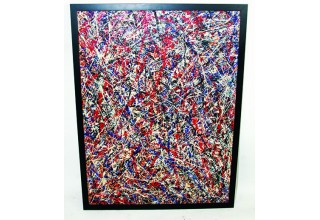 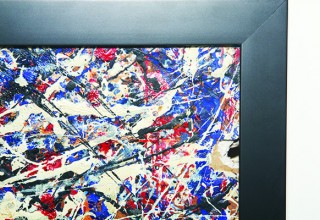 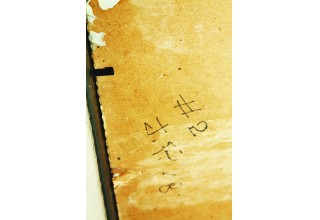 Aberdeen is a full service marketing and public relations firm.