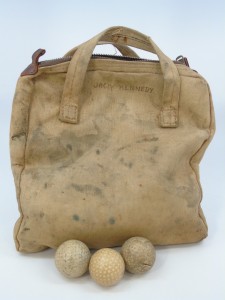 David Johnson, owner of Greenwich Auction said: “This is a rare chance to own these incredibly personal items of President Kennedy’s. Given the sales history of Kennedy estate items from prior auctions, these authentic personal objects will generate intense excitement for collectors, history buffs and golf enthusiasts interested in owning Kennedy family memorabilia. Kennedy estate items retain their high investment value because collectors are keenly aware of their rarity.  We expect this to be a very lively auction.”

The collection is the result of a 20 year friendship between President Kennedy and former Greenwich, Conn. resident Elijah N. Jones. Mr. Jones, now deceased, was President Kennedy’s mentor and then close friend while Ensign Kennedy was stationed at the Office of Naval Intelligence field office of the Sixth Naval District in Charleston, South Carolina. Jones, seven years older than Kennedy, was a Lieutenant JG and head of the ONI field office. He and Kennedy roomed together and became golf partners and close friends until the President’s death in 1963. The collection has remained intact in the Jones family for over 70 years.

Included at auction are three letters written to Mr. Jones by President Kennedy, prior to his presidency. The first is from 1946 before he entered politics, the second was written while a Congressman in 1952 and is on his congressional stationary and the third from Senator Kennedy in 1957. Each are typed and include personal handwritten notes by President Kennedy such as: “Hope to see you soon,” and “Best to your family.”

Mr. Jones’s son commented on the items: “My father was never a good golfer, Jack Kennedy was. His handicap was a 7, no other president had a handicap like that. When he shipped off for PT boat patrol in the Pacific, he left his much used golf ball bag and golf balls with my father. We hope that whoever ends up with these items will cherish them as our family has and hopefully display them for others to appreciate and admire.”

The collection will be sold in lots, with each lot receiving certified copies of the letters and certified letter of provenance

Greenwich Auction is a premier auction house, strategically located in Fairfield County, Connecticut. They continually offer unique items of value and historical interest from collections throughout Fairfield County, Westchester, New York City and beyond. The collection of Kennedy auction items are available for public viewing beginning June 1st, or earlier for private viewing by qualified buyers.  The auction itself will be held Sunday, June 5th, 2016 at 11 am at Greenwich Auction, 83 Harvard Avenue, Stamford, CT.  203-355-9335   Please contact info@greenwichauction.net regarding this special auction. For more information on Greenwich Auction please visit their website: www.GreenwichAuction.net.

Aberdeen is a full service marketing and public relations firm.