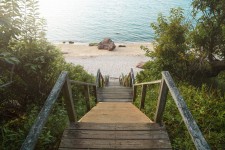 "Protecting Long Island while understanding its growing needs takes a community and a true love for the land we live on," Rocchetta said.

The three explored possible solutions for balancing Long Island's energy demand and concerns for land preservation. Collectively, the group determined that the development and extension of Net Metering of Solar Photo Voltaic Systems is a vital component of this goal.

Net metering (NEM) enables solar power customers to generate their own clean electricity. Most solar power customers generate more electricity than they consume at certain times, net metering allows them to export the surplus energy back into the grid and receive a retail energy credit for the exported energy to reduce their future electricity bills. NEM policies and incentives play a crucial role in motivating homeowners and businesses to install solar arrays on properties.

"Land preservation and meeting the increasing power demands of Long Islanders is a challenge to balance. However, creating energy independence at the local level reduces the need for new power plants, large powerline poles, underwater cables, and disturbances to open lands and marine bottoms," Rocchetta said.

The extension of NEM policy is vital to achieving these goals. NEM 2.0 is due to expire in 2019. Its replacement is NEM 3.0 - which may not allow retail credit for excess power generated. However, the law guarantees that any solar electric system installed and approved before the implementation of NEM 3.0 will be "grandfathered" in under the old rules. It will preserve retail energy credits for those consumers for 20 years, with customers placed in the following program after that time frame.

Therefore, it is essential for consumers interested in achieving the benefits of the NEM policy to act quickly to get the best return on their new solar electric system. Installation before the potential rule changes go into effect is critical to get optimal returns.

Whether you're a homeowner, a business owner or a builder or architect, GreenLogic's experts can design and install the ideal solar power system for your needs.