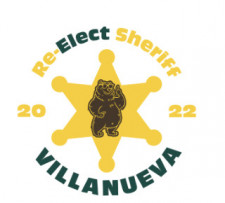 "Despite constant negative attacks by the Los Angeles Times, we are proud to announce the endorsements of these local papers. Reporting at the grassroots level is so important to our varied communities across Los Angeles. This county is so diverse and it needs journalists who represent all the communities that the Sheriff's department serves. I look forward to continuing to serve all residents of Los Angeles county in my second term," said Sheriff Villanueva.

Final Campaign events include rallies and canvassing on Saturday, Oct. 22 and Saturday, Oct. 29. For more information, visit www.alexvillanueva.org and follow @Alex4Sheriff on Instagram.

The election is on Nov. 8, 2022. Be sure to visit your local polling station or vote by mail.

When elected Sheriff four years ago, Sheriff Villanueva became the first candidate to unseat an incumbent LA Sheriff in over a century. Running on a campaign platform of "reform, rebuild and restore", Sheriff Villanueva began to immediately address challenges within the department that plagued it for so many years under previous administrations. The Sheriff wasted no time in tackling these problems, such as instituting policies that ban deputy "gangs", equipping all deputies with body-worn cameras, banning transfers to ICE and raising standards that helped diversify the leadership within the department (such as raising standards for internal promotions, new hires and senior command staff). Along with creating the most diverse senior command, Sheriff Villanueva's actions resulted in a dramatic reduction in use-of-force lawsuits against the department.