A grassroots Colorado movement calling for new "Floyd Rights" laws that protect human dignity during detainment and arrest will add its voice to a chorus calling for more aggressive police reform.

BOULDER, Colo., August 26, 2020 (Newswire.com) - ​This Friday, Aug. 28, advocates from across the US will gather with Rev. Al Sharpton and the National Action Network (NAN) for the "Commitment: Get your Knee Off our Necks" March on Washington.

A grassroots Colorado movement calling for new "Floyd Rights" laws that protect human dignity during detainment and arrest will add its voice to a chorus calling for more aggressive police reform.

"The physical act of taking a suspect into custody is a moment of extreme vulnerability, fear and uncertainty for many people in America," says Floyd Rights co-founder Dr. Stuart Lord. "Floyd Rights curtail the use of force by police and substantially limit when the police may ever use excessive or lethal force."

"The codification of Floyd Rights will reframe the way police interact with the public," says Floyd Rights co-founder Douglas Katich, "and, in turn, how the public perceive the police – from serve and protect to serve and respect."

The Floyd Rights movement advocates changing the legal standard when police may use force to conform to the European Convention on Human Rights, which allows police use of force (any force) only when it is "absolutely necessary" and the means of force used must be proportionate to the lawful police objective pursued.

In contrast, the U.S. minimum constraint on the use of police force is the inherently vague "reasonableness standard." The reasonableness standard perpetuates racial disparity because the law defers to an officer's subjective perceptions of threat, which are influenced by implicit and explicit bias and racial stereotypes. According to Douglas Katich, “quite simply, many acts of police brutality and police killings justified under America's standard are unlawful under Europe's standard.”

The Floyd Rights movement also advocates that police orally provide a detained suspect with a declaration of rights at the moment of detainment, akin to our Miranda Rights: "You have the right to be treated with dignity, respect, and without injury at all times. It is my duty to ensure you are not harmed. I will not use force unless it is absolutely necessary. If the use of force is necessary, only the very minimum force will be used, and excessive force will never be used.”

“Police must observe and respect our fundamental rights. If our rights are clearly defined, articulated and easily understood, this ensures their protection,“ states Dr. Lord.  According to Mr. Katich, “policing from a human rights-based approach will help naturally de-escalate and reduce the use of force by the police and this also promotes police legitimacy.”

The senseless killing of George Floyd and the absurd shooting of Jacob Blake spotlight the scourge of police brutality and police killings of unarmed people of color in America. Public demand for police reform has been elevated in recent years by the Black Lives Matter movement and also by current civilian protests happening throughout the country. Still, a long legacy of racist policing has led to a death rate for Black men at the hands of the police that is three to four times higher than for White men, says the American Journal of Public Health. (https://ajph.aphapublications.org/doi/10.2105/AJPH.2018.304559)

About Floyd Rights: Floyd Rights is a non-profit organization established in Boulder, Colorado. Floyd Rights’ mission is to effectuate substantive legal change at the federal, state and municipal levels through scholarship, research and legislative lobbying efforts designed to achieve a human-rights-first policing framework that promotes human dignity and the sanctity of life, while, at the same time, rebuilding the public's trust in the police. See www.floydrights.org for more information about Floyd Rights.

To understand why newly enacted police reform laws and pending legislation do not go far enough to safeguard against police brutality, see https://www.floydrights.org/be-empowered

For more about the "Commitment: Get your Knee Off our Necks" March, see https://nationalactionnetwork.net/?fbclid=IwAR0IaJZvEu40M7VFYS4Lh6sEXpHGFcZse3vERS-oSXmYsvtRF3By0uUM4eo 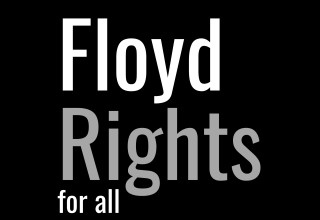