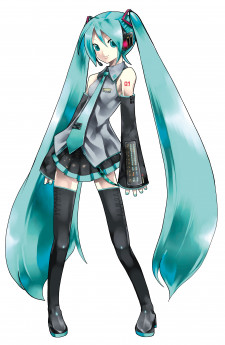 LOS ANGELES, February 25, 2021 (Newswire.com) - In an announcement that's sure to excite the millions of Hatsune Miku fans around the globe, Crypton Future Media, Graphic India and Carlin West Agency have announced the development of an original animated series featuring Hatsune Miku, the virtual pop-star sensation. In addition to animation, the companies are also planning to launch an original series of Webtoons and comics based on the iconic character.

Hatsune Miku, the virtual popstar performer who debuted as a voice synthesizer, has opened for Lady Gaga, launched sold-out concerts worldwide with performances in the US, Europe and Asia, and is part of the lineup for the upcoming Coachella festival.

"We are excited to partner with the exceptional team at Graphic India and Carlin West Agency to take Hatsune Miku into this new animated series direction," said Crypton Future Media overseas licensing director Guillaume Devigne. "We believe we have found a unique way to create an original animated series that stays true to the essence of Miku, who is a perfect vessel for fan creativity and unlimited opportunities for artistic expression. It will be a major moment for Miku and her fans around the world."

Miku (as fans affectionately call her) is a worldwide phenomenon. The virtual singer reaches over 5 million fans across social media and has been featured in thousands of songs, YouTube videos and artworks made by individual creators through an innovative licensing scheme.

"Hatsune Miku is one of the most defining and trendsetting character entertainment phenomenon's of the last decade," said Sharad Devarajan, Co-Founder & CEO of Graphic India. "In the same way she revolutionized the music industry, we are so honored to be working with the legendary Hiroyuki Itoh and his amazing team at Crypton Future Media, to take Miku into a groundbreaking animated series for her millions of fans."

Miku's fans will be able to experience a new original series and enter the story of the "Mikuverse" that will combine live action, animation and music. The companies have begun development toward a modern, entertaining story with an exciting new look for Hatsune Miku and scripts that will resonate with longtime Miku fans and beyond.

The new Hatsune Miku series will be created by Sharad Devarajan and Carlin West and a team of esteemed writers and artists. Devarajan and West will also serve as Executive Producers on the series along with Crypton Future Media CEO Hiroyuki Itoh.

JOHN WOO TO PRODUCE STAN LEE'S 'MONKEY MASTER' WITH GRAPHIC INDIA AND POW! ENTERTAINMENT
THE PROJECT WILL BE A LIVE-ACTION SUPERHERO ADAPTATION BASED ON THE STORY CREATED BY STAN LEE AND SHARAD DEVARAJAN
Graphic India - Apr 1, 2021