Grape Shot! Family of Farmers Behind Blanc Vineyards Partners With NBA to Introduce Consumers to a New Kind of Table Grape 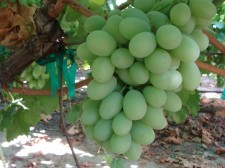 DELANO, Calif., June 4, 2019 (Newswire.com) - A family of grape growers in California has partnered with the National Basketball Association (NBA) to introduce consumers to a new variety of the healthy snack food.

The Campbell and Middleton families, owners of Blanc Vineyards in Bakersfield, have entered the company into a multi-year licensing deal with the NBA that will see official league and team logos on packaging for its newest varieties, including the Pristine, at supermarkets and in big box stores nationwide starting in June.

The Pristine is the flagship, proprietary variety grape of Blanc Vineyards and considered to be the best green variety globally. Pristine grapes have been carefully cultivated for more than 20 years to create a large, crispy, green seedless grape with all the characteristics consumers and retailers covet. The Pristine grape has a crisp snappy texture coupled with a taste that starts off with a sweet vanilla streak and ends with a zesty Granny Smith apple finish. They are grown to retain firmness and fresh taste well after harvest.

The NBA partnership gives Blanc Vineyards a way to introduce consumers to a new kind of grape in an unexpected way. “Green grapes are natural, healthy snack food. To most consumers, they’re all the same, but they’re really not, which is why we believe the NBA partnership makes sense,” said Jack Campbell, co-owner, Blanc Vineyards. “The NBA does an unbelievable job of highlighting their athletes, and we are applying the same strategy to the grape industry. Our Pristine green seedless grapes are bigger, crunchier and tastier. We consider them to be the world champions of the grape industry. By putting consumers’ favorite sport- or team-logo on our packaging, we’re able to instantly differentiate our products with a familiar and trusted name when they least expect it. That gives us a huge advantage at points of purchase and again for return sales.”

Campbell gave more detail on the reasoning behind the partnership. “We want to reach kids, moms, and millennials and working with the NBA is a great way to do that. They're currently experiencing explosive growth. They have a huge social media following and they use it in ways other professional leagues don’t. The NBA is popular globally, not just in North America, and has a very diverse fan base. It is these consumers we’re targeting.”

According to the U.S. Department of Agriculture (USDA) grapes represent a $6B crop in the U.S. with more than seven million tons produced each year between 2015 and 2018, mostly in California.

Blanc Vineyards is a joint venture between Four Star Fruit, Inc. and Delano Farms, Inc. that began in 2010 in Delano, California after growing grapes in Kern County, California for decades. This partnership gives both companies exclusive rights to grow and distribute Pristine variety grapes. The companies sell grapes from May to January and ship a combined 20 million boxes annually. 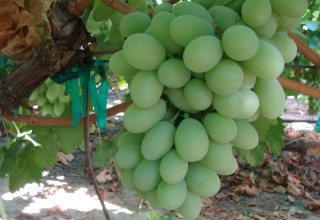 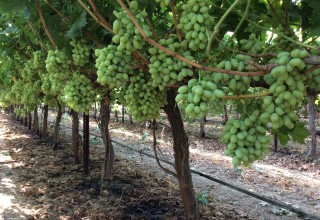 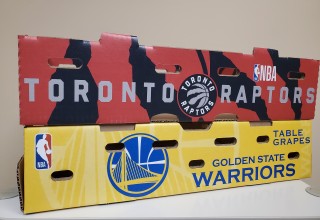