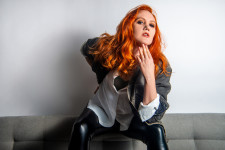 "Landon" is a deeply personal, true-story song written as an unabashed apology from the artist to her gay best friend (Landon Beatty) for not being there when he came out right after high school. Growing up in a small town in Alabama, Pettis grew up in a homogenous community steeped in a traditional Christian faith. Deconstructing bias with each masterfully poetic lyric, Pettis puts her own youthful, "traditional" values under the microscope, and the result is a transcendently beautiful testament to the power of change, forgiveness, and the inner strength that comes from standing firm in who you are.

Pettis hopes that the song can help others who may have experienced similar situations, sharing, "Landon and I are close again now, thanks in part to the song. And we both love that it sheds a little light in the world for the next generation of gay kids growing up in the South, and for their best friends and families and all the people that love them. We hope it makes things just a little bit easier and clearer the next time around."

The stunning video with a mixture of live performances and animation was filmed in Los Angeles. Directed by Ben Jehoshua, produced by Brian Graden Media, and edited/animated by Evan Monheit, it also features Landon Beatty (whom the song is about), who acted in and additionally choreographed the video.