Government Bid / Contract Activity in 2016 for U.S. and Canada

Record Breaking Year in 2016 for U.S. and Canadian Government Purchasing Activity and for the Number of Bid Requests and RFPs. Last year, BidPrime captured 1,255,240 (1.25 million) US + Canadian bids, which represents a 14.5% overall increase compared to 2015. 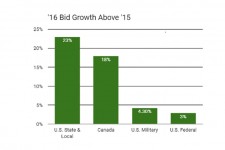 AUSTIN, TX, February 2, 2017 (Newswire.com) - BidPrime, an Austin-based company, which provides real-time notification of new government bids and contract opportunities, disclosed their findings from an analysis of government bid and purchasing activity for 2016. U.S. state and local governments, along with the Canadian government, were responsible for the most significant growth noted in terms of numbers of bids submitted above 2015, 23% and 18%, respectively. While modest growth in comparison, solicitations and purchases by U.S. military entities and the U.S. federal government were next in line to further boost the final tabulations.

​Stephen Hetzel, BidPrime’s Operations Officer and Co-Founder, provided his opinion on the results, “In recent years, we have continued to track how the streamlining and optimization of governmental eprocurement systems have had an impact on bid volume, particularly in state and local government purchasing. I predict with confidence that the leveraging of eprocurement solutions will continue to increase the number of available competitive solicitations.” He continued, “In 2016, the Quick Quote solicitation process played a pivotal role by replacing the non-competitive purchase order process. Governments look to save money and Quick Quotes are an efficient instrument to cut costs and provide realistic volume purchasing.”

"In recent years, we have continued to track how the streamlining and optimization of governmental eprocurement systems have had an impact on bid volume, particularly in state and local government purchasing."

A residual impact which eprocurement solutions, Quick Quotes, automation, and other factors are having is timelines, the moment a bid is published/distributed to the response date, continue to decrease. BidPrime projects that these will be among the variables that ultimately produce further increases in bid and purchasing efforts by the public sector in 2017.

While there was robust spending in 2016, projections provided in usgovernment.com and budget.gc.ca forecast that government spending in the U.S. and Canada will further grow in 2017.

Launched in 2009, BidPrime is a technology company that provides real-time notification of new federal, state, and local government bids and contract opportunities using a streamlined User Interface. BidPrime utilizes modern technology to better collect and consolidate government bids and RFPs and provides a clear and timely window into government purchasing. In addition, clients are provided analytic and research tools designed to follow emerging trends in their industries and for use of historical information for better intelligence on new leads.

If you would like more information about these findings, or to schedule an interview with Stephen Hetzel, please call Bill Culhane at 888.808.5356 or e-mail Bill at bculhane@bidprime.com.

BidPrime is a technology company which provides real-time alerts of new federal, state, and local government bids and contract opportunities, along with the associated bid documents, using a streamlined User Interface.