Goodgame Studios Hits Turnover of 1 Billion With Knights and Cows

HAMBURG, Germany, November 29, 2017 (Newswire.com) - “EMPIRE” and “BIG FARM” are the names of Goodgame Studios’ most successful mobile and browser games with over 340 million registered users. With a turnover of USD 1 billion, the German games forge, Goodgame Studios, https://www.goodgamestudios.com/de, is making a return to the top ranks of the gaming industry. This is an achievement “made in Germany” that is also causing a stir in the international gaming world. The two creative minds behind the company – founders and managing directors Dr. Kai and Dr. Christian Wawrzinek – thank their team for this success and they are confident: “EMPIRE and BIG FARM in particular are a remarkable success for Goodgame Studios and we can do more. The gaming industry still has huge potential. For our employees and for us, reaching this milestone is both reason to celebrate and an incentive.” Refer infographic: https://www.goodgamestudios.com/1MrdUmsatz

As the managers of one of Germany’s biggest gaming companies, the Wawrzinek brothers often found themselves in the same position as their players on their way to making a million: seeds that were sown did not always germinate; patience, fighting spirit and lots of strategic skill were necessary. After a phase of enormous growth in 2014 and 2015, they managed with blood, sweat and tears, tough cutbacks and restructuring in 2016, to get Goodgame Studios back on course in 2017. “It was absolutely essential for us to focus again fully on our core brands of EMPIRE and BIG FARM,” says Dr. Christian Wawrzinek. “Only in this way were we able to achieve turnaround, and we are now once again on a course of growth.” The successful launch of the mobile game “BIG FARM: MOBILE HARVEST” underlines this statement. In less than one month, the game has been installed over 2 million times worldwide.

In the fantastic world of BIG FARM, one can only become a successful farmer with business skills, the right strategy and a strong community – and those are the principles to which the team at Goodgame Studios also adhere when it comes to continuing the company’s steep upward curve in the future.

Goodgame Studios is a leading developer and provider of gaming software, specialising in the free-to-play segment. Its focus is on mobile and browser games. The company provides its games in 26 languages and has over 300 million registered users worldwide. Empire: Four Kingdoms – the world’s most profitable app produced by a German company since 2013 – is part of Goodgame Studios’ portfolio. The games developer was founded in Hamburg in 2009 and is owner-managed. Apart from the head office in Germany, the company has a branch in Tokyo. Goodgame Studios exclusively distributes games it has produced itself, directly and through a global network of partners. 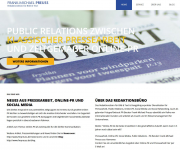