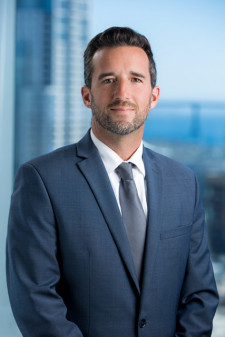 SAN DIEGO, February 7, 2022 (Newswire.com) - Attorney Brian Mason grew up in a small town in Oregon where he spent most of his free time playing basketball and working summer jobs on farms and in a paper mill. Eventually Brian went on to play college basketball in Portland, Oregon. After his basketball career ended, Brian received a Bachelor of Science in Sociology from the University of Oregon in Eugene, Oregon. Brian then attended law school at Thomas Jefferson School of Law in San Diego, California where he received the Witkin Award for receiving the top grade in Criminal Law, Civil Procedure, Trial Practice, California Evidence, and Legal Writing.

Since law school, Brian has appeared in California State and Federal Courts thousands of times, including as the solo counsel on dozens of jury trials. Brian's first trial was only 6 months out of law school and was a bench trial in Federal Bankruptcy Court where Brian successfully took on Wells Fargo Bank and was able to remove a $150,000 lien from his client's home. After that, Brian was lead counsel in dozens of jury trials in criminal cases that included multiple life-in-prison felony cases, including the "Coronado Bridge Road Rage Case" trial in which ABC, NBC, and CBS all had cameras in the courtroom throughout the trial to witness Brian obtain an acquittal for his client in this high-profile case in which his client was arrested for attempted murder on the Coronado bridge.

In 2011, Brian worked as an expert legal correspondent on radio programs on KCBQ 1170 AM and KPRZ 1210 AM where he was interviewed about multiple high-profile cases at the time, including the Casey Anthony Murder Trial and the Wal-Mart Wage Discrimination Class Action lawsuit.

As a result of his vast jury trial experience in civil personal injury cases on behalf of both Defendants and injured Plaintiffs, Brian was voted in as a member of the distinguished American Board of Trial Advocates ("ABOTA"). Less than 1% of all lawyers in the United States are allowed membership by invitation and only after the lawyer has completed a certain number of civil jury trials. Brian was inducted into this prestigious group in 2020 after having been the lead and solo trial attorney successfully trying more than 30 civil and criminal trials by jury.

In addition to being a member of ABOTA, Brian was voted as a Super Lawyer Rising Star in 2018, 2019 and 2020. He was also voted into the prestigious TOP 100 Personal Injury Lawyers in America Club and the National Top 100 Trial Lawyers. In 2017, Brian also accepted a part-time position as an adjunct professor of law teaching Legal Writing II at Thomas Jefferson School of Law.

"I am beyond excited to add Brian to our deep and talented roster of real trial lawyers," states Founder and President John Gomez. "His experience working for insurance companies will also provide enormous benefit and value to both our clients and lawyers."

Brian will focus his work on representing people and families that have suffered catastrophic harm because of the conduct of others.

Dolman Law Group is not just a Florida law firm, but a national one — we also serve clients from our offices in San Antonio, Boston, Houston, Savannah, and the Bronx. Once you find an office near you, call us for your free case evaluation.