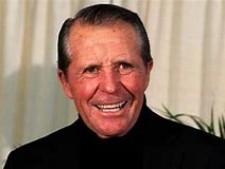 BUFFALO, N.Y., April 10, 2019 (Newswire.com) - What does it take for a 9-time Major Championship winner to not only try a new golf ball but then both endorse it and also personally invest in the company? A ball that performs to the standards demanded by such a Legend. Gary Player is that Legend.

Mr. Player has always believed that, in business, everything is negotiable except quality and that is the reason that he has chosen not only to endorse the OnCore ELIXR but to also join Charles Schwab and Al Geiberger as an investor in OnCore Golf.

Mr. Player commented, “The performance of the ELIXR golf ball off the tee as well as its feel around the greens makes it the perfect choice for professional and amateurs alike.” Mr. Player was also thrilled to hear the latest news from OnCore and stated, “I would like to congratulate my partners at OnCore for receiving the 2019 Hot List Gold Award level from Golf Digest for their ELIXR ball” and added with a smile, “While it is a tremendous achievement, it doesn’t surprise me as this ball has more of a feel than any other ball I have used in 65 years as a pro and is suitable for all types of golfers. I have always surrounded myself with winners and this ball is definitely a winner.”

Mr. Player, a 3-time Masters Champion, will be launching his relationship with OnCore by playing the ELIXR ball at this year’s Masters both in the Par 3 Tournament as well as when he hits his ceremonial inaugural drive to officially kick off the Masters along with Jack Nicklaus Thursday morning.

OnCore Chairman and CEO Keith Blakely said, “We are honored and humbled that one of the greatest golfers in the game’s history has put OnCore in his bag and in his portfolio. Given what Mr. Player brings to the game of golf – both on and off the course – we’re delighted to have his endorsement and his involvement in the growth of this exciting company.  You can be sure that everyone in our office will be watching closely Wednesday and Thursday to see Mr. Player with our logo on his bag and our ball on his tee. It will undoubtedly be a very special, highly rewarding experience to have one of golf’s greatest players ever using the product that we’ve spent years developing and at an event that is without peer.”

When asked what makes the OnCore ELIXR so special, Mr. Blakely said, “The ELIXR ball is a product that merged OnCore’s original patented technology for maximum perimeter weighted balls with proprietary advanced material elements to create the ultimate golf ball. Our unique composite core delivers an exceptional ‘Coefficient of Restitution’ that pushed the ball to the maximum allowable initial velocity – exploding off the tee and maximizing distance. Combined with our proprietary polymer mantle designed for maximum perimeter weighting, the ELIXR delivers outstanding accuracy and control – especially noticeable in windy conditions. On top of that, our premium cast urethane cover delivers a soft and pure feel off the club face that gives the ELIXR ultimate green-side control, durability, and putting performance.”

Gary Player is a South African professional golfer widely considered one of the greatest golfers ever. The most traveled athlete ever, Player accumulated nine major championships on the regular tour and nine Champions Tour major championship victories. At the age of 29, Player won the 1965 U.S. Open and became the only non-American to win all four majors in a career, known as the Career Grand Slam. Player became only the third golfer in history to win the Career Grand Slam, following Gene Sarazen and Ben Hogan, and only Jack Nicklaus and Tiger Woods have performed the feat since. Mr. Player is also the only man in golf to win the Grand Slam on both the regular and Champions Senior tours. Player has won 165 tournaments on six continents over six decades and was inducted into the World Golf Hall of Fame in 1974.

OnCore is dedicated to delivering breakthrough technology and innovation, while inspiring golfers at all skill levels and abilities. The company entered the golf ball industry through development of the first-ever commercially available USGA-conforming hollow metal core ball. The Company has since developed a growing suite of innovative products distributed worldwide that now includes the top-performing ELIXR tour ball. For more information, visit OnCore Golf.