NEW YORK, April 26, 2019 (Newswire.com) - On May 1, Phoenix Ancient Art, one of the world’s leading dealers in well-provenanced antiquities, will be launching its newest themed exhibition in New York entitled, GOD OF WINE: The world according to Dionysus. The display is designed around the theme of grapes, Satyrs, and the serving of wine in antiquity in an inspired and everlasting mood of joy.

On view at the exhibition, an Attic Greek red figure vase scene attributed to the Epiktetos Painter highlights the Dionysiac thiasos, including Dionysus himself carrying a rhyton filled with wine in one hand and a vine of grapes in the other. His usual companions, dancing ithyphallic satyrs and maenads, are seen by his side following in celebration.

Another fine wine related object is a unique silver coin with a bunch of grapes in relief. An extraordinary example of coinage from the Cycladic islands in the 6th century B.C. Hicham Aboutaam, President of Electrum, the exclusive agent for Phoenix Ancient Art, says, "I have never seen a coin like this one, it was acquired at a Zurich auction house in 2010 and now is the perfect time to show it among so many great antiquities related to wine. A beauty from the Cyclades where grapes were cultivated and Dionysus was worshipped." 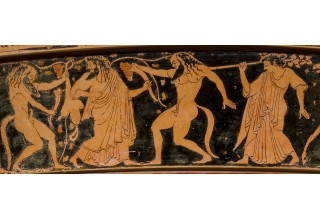 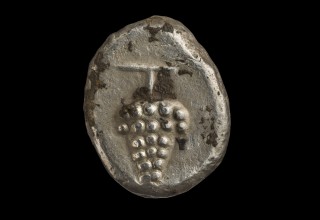