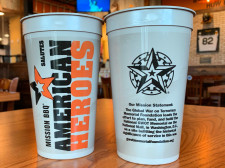 WASHINGTON, May 10, 2021 (Newswire.com) - Today, The Global War on Terrorism (GWOT) Memorial Foundation and MISSION BBQ announced the launch of the latest "American Heroes Cup" campaign. Nearly half of the proceeds from the sale of the iconic cup will supplement the Foundation's efforts to build a permanent place of reflection on the National Mall to honor all who've served and are still serving in the Global War on Terrorism.

Beginning May 10, MISSION BBQ customers can purchase the cup bearing the GWOT Memorial Foundation's logo and mission statement at any of the patriotic BBQ chain's 106 locations nationwide. The American Heroes cup retails at $3.99 per cup, and MISSION BBQ will donate $2 from the sale of each cup directly to the GWOT Memorial Foundation. Customers who bring their American Heroes cup back to MISSION BBQ for subsequent visits earn $.99 cent refills.

"Our goal at MISSION BBQ is to remind ourselves and our customers each day what makes America great: our service members, our first responders, and our military veterans and families," said Bill Kraus, co-founder of MISSION BBQ, "It's an honor to provide support to the GWOT Memorial Foundation to build a monument to all who've served in the nation's longest ongoing conflict."

"The GWOT Memorial Foundation couldn't do the work that we do without partners like MISSION BBQ," said GWOT Memorial Foundation President & CEO Marina Jackman. "We couldn't be more grateful for people like Bill Kraus and friends like MISSION BBQ who share our mission and understand the deep dedication that our service members, veterans, non-uniformed civilian service members, and military families have shown to this country."

MISSION BBQ opened its doors for business on Sept. 11, 2011, 10 years after the world changed. We believe there is nothing more American than BBQ. And nobody more American than the brave men and women who have sworn to protect and serve our communities and our country. We do what we do for the love of our soldiers, firefighters, police officers, and first responders—all our loved ones in service. We set across this great land from Texas to Kansas City, the Carolinas to St. Louis...to discover the secrets of great BBQ. Every day we strive to serve you authentic BBQ made from the freshest, most delectable ingredients and serve it to you in a patriotic dining room filled with tributes to those who've made our country great, given to us by the people who earned them. Stop by at 12 noon as we sing our national anthem. Every day. For more information about MISSION BBQ, visit mission-bbq.com.

About the GWOT Memorial Foundation:

The Global War on Terrorism (GWOT) Memorial Foundation was founded in 2015 by a group of like-minded service members, military veterans, and military families. In 2017, the GWOT Memorial was approved by Congress, and the GWOT Memorial Foundation was designated as the sole non-profit organization tasked with planning, funding, and overseeing design and construction of the national GWOT Memorial. As it stands, legislation is pending in Congress that would designate a location on the National Mall for the memorial that will fully honor the service and sacrifice of all who've served in the GWOT. We invite all who share our mission of honoring those who've risked and given their lives in the GWOT and those who've supported them to join us. Learn more at gwotmf.org and on Facebook, Instagram, and Twitter.