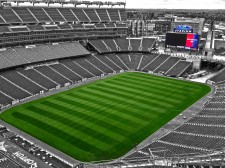 FOXBOROUGH, Mass., May 11, 2017 (Newswire.com) - The upgraded installation of Gillette Stadium’s synthetic turf surface is now complete and will make its debut when the New England Revolution host Real Salt Lake on Saturday, May 13. The new surface features FieldTurf’s latest monofilament technology. FieldTurf has been the surface of choice at Gillette Stadium since transitioning from grass in 2006.

Gillette Stadium’s new field will feature FieldTurf’s revolutionary new premium system, featuring the industry’s highest-performing monofilament fiber that makes the surface player-friendly, resilient and durable. Along with the most innovative fiber technology in the industry, this state-of-the-art turf system features FieldTurf’s proprietary heavy infill system, which is critical to performance and playability. The result is a surface that plays soft, feels real, looks great and hangs tough.

“Keeping in line with our commitment to ensure that the Patriots and Revolution consistently have the latest in synthetic field technology, we are pleased to have been selected once again by Gillette Stadium,” said Eric Daliere, President of Tarkett Sports. “It is an honor and a testimony to the quality of our products that such prestigious organizations continue to put their trust in our company. We look forward to continuing this longstanding relationship with the Patriots, Revolution and Gillette Stadium for many years to come.”

FieldTurf is the surface of two other joint NFL/MLS stadiums: Seattle’s CenturyLink Field, home of both the Seahawks and Sounders; and Atlanta’s Mercedes-Benz Stadium, home of both the Falcons and United FC. The MLS’s Portland Timbers also feature a FieldTurf surface at Providence Park.

FieldTurf is the synthetic surface of choice for many teams in the NFL, featuring 16 installations across the league, including five game fields. In addition to the three joint NFL/MLS stadiums in New England, Seattle and Atlanta, FieldTurf is also featured at Ford Field in Detroit and Lucas Oil Stadium in Indianapolis. More than a third of the NFL’s teams also use FieldTurf at their practice facilities.

Manufactured in Calhoun, Ga., FieldTurf is the most trusted name in artificial turf with over 5,000 installations in the United States and 7,500 worldwide. FieldTurf is the artificial turf surface of choice of numerous professional North American teams, while hundreds of NCAA Division I programs also play on FieldTurf game and practice fields, including such powerhouse programs as Illinois, Louisville, Michigan, Missouri, Northwestern, Notre Dame, Ohio State, Oregon, Texas, Washington and Washington State, among others.

FieldTurf is the world leader in artificial turf surfacing with over 20,000 installations worldwide.