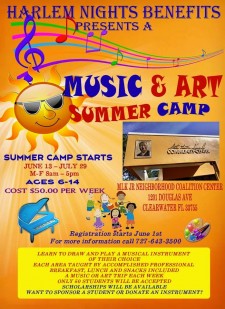 Clearwater, Florida, June 10, 2016 (Newswire.com) - A talented young flutist performed at a recital June 4 at the Scientology Information Center in Downtown Clearwater. The musical showcase promoted the Music and Art Summer Camp at the Martin Luther King Jr., (MLK) Center in the Greenwood neighborhood of Clearwater, Florida, and raised funds to provide scholarships so deserving youngsters can attend.

The 7-year-old musician Aydana Cervano delighted those attending with her confident flute performance. She learned the instrument in just two months of introductory classes.  She will continue receiving lessons at the Music and Art Summer Camp.

“This little lady is quite a gem,” said Mr. Maurice Mickens, Harlem Nights President and Founder of the Music and Art Summer Camp. “Helping young people learn to play an instrument and exposing them to the world of art will have a lasting impact on their lives.”

Mickens told the audience that the children attending the camp will  have the opportunity to perform at the Clearwater Jazz Holiday Festival this fall. To do so, by the end of the camp they have to be able to play two songs perfectly, which he expects will be a great incentive for them to make the most of their lessons.

Graphic artists, a voice coach and musicians are donating their time and skills to make this summer’s seven-week program for underserved kids an unqualified success.

Youth age 6 to 14 may attend the camp from June 13 to July 29, where they will learn to draw and play the instrument of their choice. Breakfast, lunch and snacks and a weekly field trip are also covered by the $50 weekly tuition.