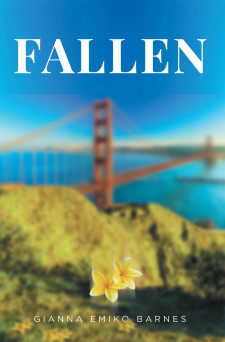 NEW YORK, May 14, 2021 (Newswire.com) - Gianna Emiko Barnes, a writer who works in education and enjoys writing in her spare time, has completed her most recent book "Fallen": an unexpected romance between Taryn and Derek, two individuals whose paths crossed only for them to find themselves in a whirlwind of surprises. As the two deal with their haunting pasts, will they be able to fully embrace the happiness they found in each other?

Gianna writes, "Taryn Okata lives a simple life, always putting the people she cares for above her own needs and desires. After surviving countless heartaches, a trip to San Francisco with her family for her brother's graduation provides her with some much-needed fresh air. With the promise of a new start and a new job over the summer, things are finally looking up for her until Derek Bennett comes crashing into her life like a freight train.

He is an up-and-coming actor whose path brings him to San Francisco to film and spend time with his little sister who is graduating. But Derek gets more than he bargains for as Taryn blindsides him with her beauty and kindness from the second they meet. After getting his own heartbroken, he is given a sense of hope. But for the both of them, their pasts will never be far behind, coming out of nowhere to haunt them and pulling them further into the depths of their hidden pains than ever before. Will the fate that brought them together be enough to save them? Or will it threaten to destroy more than the hope for happiness they have finally found in one another?"

Published by Fulton Books, Gianna Emiko Barnes' book provides a captivating love story for readers where they will experience a journey of first meetings, falling in love, moving forward, and seeking destinies.

Characters are purely fictional, but the challenges they face are very real and inspiring.

Readers who wish to experience this amazing work can purchase "Fallen" at bookstores everywhere, or online at the Apple iTunes Store, Amazon, Google Play or Barnes & Noble.

Carole Wilson's New Book, 'I'm Just Saying ... I'm Not Just Getting Older, I'm Getting Bolder', Is a Meaningful Journal of a Writer's Thoughts and Moments in Her Life
Fulton Books - Jun 24, 2021