Ghassan Aboud Honored With Award for Excellence in International Business 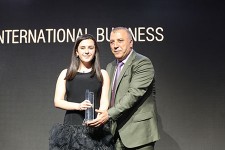 DUBAI, United Arab Emirates, December 13, 2018 (Newswire.com) - Dubai based international entrepreneur and philanthropist Ghassan Aboud was awarded for “Excellence in International Business” at the 2018 Enterprise Agility Awards – Entrepreneur of the Year held at the Hilton Hotel, Habtoor City, Dubai on December 4, 2018.

The annual event organized by BNC Publishing recognizes business leaders that have established themselves distinctly as industry innovators, made significant contributions to the regional business arena, and set the benchmark for enterprises operating across the region.

Ghassan Aboud is the Chairman and promoter of the UAE headquartered conglomerate, Ghassan Aboud Group, that is engaged in multiple businesses including automotive, hospitality, retail, catering, real estate, media, logistics, pastoral and others. In addition to its global hub in the UAE, the group also has a presence in Australia, Belgium, Jordan, and Turkey.

Reacting to the award, Ghassan Aboud said, “It is a great privilege to be accorded this recognition. The award underlines our efforts to be associated with excellence across all our business operations globally. We are much encouraged to continue with our innovative approach to business while adhering to the highest standards in integrity and ethics.”

"Entrepreneur Middle East's 2018 Enterprise Agility Awards were a celebration of the region's most prolific innovators and entrepreneurs, and we're glad to have awarded Ghassan Aboud Group Chairman Ghassan Aboud with the Excellence in International Business award at this event," said Wissam Younane, CEO, BNC Publishing, the media house behind Entrepreneur Middle East. "Over the course of his 25-year-long entrepreneurial journey, Ghassan Aboud has managed to build a global diversified multi-billion enterprise that has operations in everything from real estate to media to hospitality, and that makes him not just the ideal recipient of this award, but also a role model for other entrepreneurs in the region to take inspiration from."

Ghassan Aboud Awarded as the Leading Hospitality Investor by Hotel News ME
Cyber Gear - May 3, 2018
Newswire