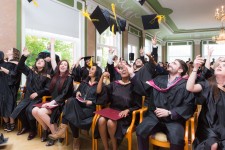 Heidelberg, Germany, June 29, 2017 (Newswire.com) - Due to recent political events in the U.K. and the U.S., Germany has become more attractive to international students. “Both the Brexit and the presidential election of Trump originated in stricter immigration controls,” says Tanja Ward, Director of Schiller International University Heidelberg. “Our business school, where only 5-8 percent of the current MBA class is German-born, is currently recording a growing number of international applicants.” Mrs. Ward acknowledges that Germany insists on students owning residence cards at an extra cost, but it offers visa-free entry not only to students arriving from the EU but also to applicants from the U.S., Canada, Australia, Morocco, South Korea and Japan. This is clearly an advantage German business schools have compared to the U.K. and the U.S.

Apart from the low entry barriers, tuition costs are another advantage to business education in Germany. The € 21.000 fee for Schiller International University Heidelberg’s one-year MBA programme is low compared with business schools in the U.K. which charge around €60-80.000. Besides, Schiller International University offers students the unique opportunity to transfer between four international campuses and earn a double degree in Europe and the U.S.

"Both the Brexit and the presidential election of Trump originated in stricter immigration controls. Our business school, where only 5-8 percent of the current MBA class is German-born, is currently recording a growing number of international applicants."

Germany was known to underperform in business education until now
However, charging students for degrees has been questioned by Germany’s publicly funded universities for a long time. And Germany has less highly ranked MBA institutions compared to the U.K. and France, Spain, Singapore and Australia, Schiller International University being among them. “The German higher education, historically focusing on the diploma, is part of the reason for this,” says Ward. The diploma took longer to complete than degrees in other countries but was seen as equivalent to a postgraduate qualification, like the MBA, in Germany. An expensive business education offered few advantages for those seeking promotion. But with the German education system radically changing, Germany is beginning to find its way and MBA recruiters are taking notice. “The future looks brighter,” says Ward. Applications at Schiller International University Heidelberg for the full-time MBA programme rose remarkably in the first quarter of this year compared to the last semester of 2016. And the fact that Germany has recently been attracting more international students looking to enter high-paying business sectors means that it will begin to compete with U.K. and U.S. business schools.