George Naddra's New Book, 'Swine Flu—1976', Explores the Political Power of a Country That Has Simultaneously Developed Both a Dangerous Virus and Its Vaccine 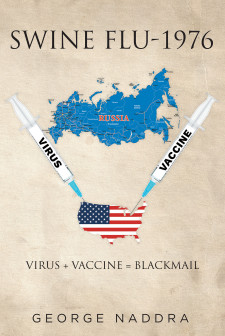 MONTGOMERY, Ala., June 10, 2021 (Newswire.com) - Fulton Books author Dr. George Naddra, a retired Air Force Colonel, has completed his most recent book, "Swine Flu—1976": an intriguing narrative that combines the 1976 controversial approach taken by the U.S. to prevent a worldwide pandemic with a suspenseful novel that follows a man who, while devising a plan to unravel the truth surrounding his father's death, threatens to uncover why the U.S. was the only nation to receive the vaccine.

George writes, "In 1976, in order to prevent a worldwide pandemic, President Ford launched a massive campaign to vaccinate every American against a mysterious strain of virus. However, no other country joined the United States in this effort, and although millions of Americans were vaccinated, the government abruptly canceled the program after three months.

"Eleven years after the cancellation of the program, Dr. Dan Clayborne decided to investigate the accidental hunting death of his father, a key employee at Daviston Pharmaceutical. In doing so, he threatened to uncover the Russian blackmailing plot that led President Ford to launch the vaccination effort.

"Many people wondered why the United States was the only country that vaccinated their people. Dr. Dan Clayborne was on the verge of finally uncovering the answer."

Published by Fulton Books, George Naddra's book will give readers an exciting journey following Dr. Clayborne's mission in a world that is continuously battling adversities from all sides of society and reality.

Readers who wish to experience this gripping work can purchase "Swine Flu—1976" at bookstores everywhere, or online at the Apple iTunes Store, Amazon, Google Play or Barnes & Noble.

Christine Vineyard's New Book, 'Good Jokes Bad Drawings', Is a Humorous Read That Brings in the Fun and Joy Despite the Complexities of Life
Fulton Books - Jun 18, 2021

Luis E. Sweeney's New Book 'The System of Things III: I Took a Stand' is an Awe-Inspiring Read About a Man Taking a Stand and Finding Closure in His Life's Challenges
Fulton Books - Jun 17, 2021
Newswire