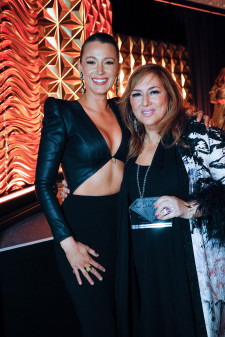 NEW YORK, March 28, 2022 (Newswire.com) - Jewelers of America (JA), the national trade association for businesses serving the fine jewelry marketplace, announce the winners of the 20th annual GEM Awards that took place on Friday, March 18, 2022, at Cipriani 42nd Street in New York. Stephen Lussier of De Beers received the prestigious GEM Award for Lifetime Achievement and Lorraine Schwartz received the GEM Award for Jewelry Style. The winners in the categories of Jewelry Design, Media Excellence and Retail Excellence were revealed live to an audience of over 500 press and jewelry industry elite.

Lorraine Schwartz brought her usual high style as she was presented with the GEM Award for Jewelry Style. Blake Lively took the stage to present the GEM Award to Lorraine with a heartfelt speech saying, "Yes, she cares about the jewels, but what drives her is the person. The humanity. The connectivity. The love. Truly that's why her work is the most spectacular out there. Because it really is made of love." Lorraine thanked her beloved family, clients and the jewelry industry saying, "I am really so grateful to the industry. We really do have a lot to say, and we can do so much for the future generation."

Stephen Lussier was honored with the GEM Award for Lifetime Achievement for setting a standard of excellence that has pushed the diamond industry forward in pursuit of the diamond dream. In his speech, he said, "Consumers want to associate with the categories of products and brands that share their values. That to me is the new part of the diamond dream." Charles Stanley presented the award to Lussier.

Jewelers of America's GEM Awards is the fine jewelry industry's premier accolade gala, which recognizes the achievements of individuals and companies whose work raises the visibility and status of fine jewelry and watches. Please visit gemawards.jewelers.org.