From Interferon to Philanthropy: Autobiography of Immunologist and Philanthropist Jan Vilcek Published as Audiobook

NEW YORK, April 22, 2021 (Newswire.com) - The Vilcek Foundation announces the publication of Dr. Jan Vilcek's 2016 autobiography Love and Science: A Memoir as an audiobook. In Love and Science, Vilcek tells the remarkable story of his life — from hiding from Nazis in the former Czechoslovakia during World War II to his research on cytokines and interferon that led to the development of infliximab-Remicade ® to his life in philanthropy.

Initially published by Seven Stories Press, the Vilcek Foundation obtained the rights to publish Love and Science as an audiobook in 2019. "Jan's life story is nothing short of extraordinary," says Vilcek Foundation President Rick Kinsel. "His humility, empathy, and curiosity have led him to accomplish amazing things, and to affect positive change in the world on a grand scale."

Vilcek began his medical and scientific career under the constraints of Communist Czechoslovakia, attending medical school at Bratislava's Comenius University. He published his first single-authored paper in Nature in 1960 on interferon and tick-borne encephalitis while completing his Ph.D. at the Czechoslovak Academy of Sciences' Institute of Virology.

In 1964, Vilcek and his wife Marica defected from Czechoslovakia in pursuit of careers free from the constraints of the Communist regime. In February 1965, the pair emigrated to New York, where Jan was offered an assistant professor position with the New York University School of Medicine. Marica, an art historian and curator, began work at The Metropolitan Museum of Art.

At New York University, Vilcek continued his research in immunology, with a particular focus on cytokines and interferon. While studying potential treatments for cancer — particularly to target tumor necrosis factor (TNF), Vilcek and Junming Le created a monoclonal antibody against TNF-alpha infliximab. The chimeric antibody was ineffective in treating cancer — Vilcek and Le's initial goal — however, it proved successful in treating autoimmune disorders like rheumatoid arthritis and Crohn's disease. Vilcek and Le helped develop the biologic drug, infliximab, or Remicade ®; it quickly became one of the most commercially successful drugs, and Remicade ® remains among the top-10 most-prescribed drugs in the world.

The Vilcek Foundation partnered with actor Daniel K. Isaac in early 2019 to begin a discussion about the development of the audiobook project. "It meant a lot to me that I, as an Asian American and child of immigrants, was asked to be the voice for a Slovakian immigrant and renowned immunologist," said Isaac. The foundation coordinated recording of the project with John Marshall Media in New York in 2020, completing recording in early 2021.

"This is a memoir to be cherished," says David Oshinsky. "Dr. Jan Vilcek's remarkable life bears witness to the totalitarian evils of Nazism and Communism that shaped his native Czechoslovakia, and to the life-saving miracles he produced in the laboratories of his adopted homeland, the United States. It's a story of courage and freedom, of discovery and philanthropy — told with the elegant modesty of a man who devoted his life to easing the world's pain. Put simply, it demands to be read."

The audiobook of Love and Science is available on Audible, iTunes, and Amazon. Further information is available at vilcek.org.

The Vilcek Foundation raises awareness of immigrant contributions in the United States and fosters appreciation of the arts and sciences. The foundation was established in 2000 by Jan and Marica Vilcek, immigrants from the former Czechoslovakia. The mission of the foundation — to honor immigrant contributions to the United States and, more broadly, to foster appreciation of the arts and sciences — was inspired by the couple's respective careers in biomedical science and art history. Since 2000, the foundation has awarded over $5.9 million in prizes to foreign-born individuals and supported organizations with over $5.3 million in grants. 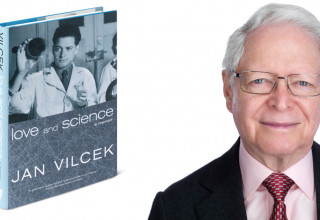 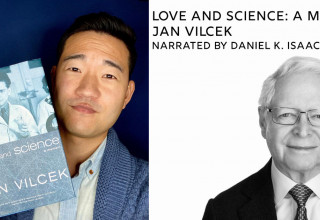 Marica Vilcek, Philanthropist and Art Historian, Honored by NYU Institute of Fine Arts
The honor recognizes Ms. Vilcek's commitment to excellence in curatorial education and her dedication to providing meaningful opportunities to students and scholars
The Vilcek Foundation - May 18, 2021