Fredericksburg-based non-profit, 1st Responder Canine (FRK9), has launched a GoFundMe campaign to fund an MRI for a service dog assigned to the Fairfax County Police Department. 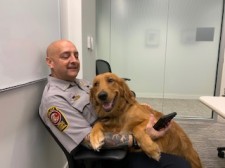 FREDERICKSBURG, Va., February 25, 2020 (Newswire.com) - ​​The service dog, FRK9 Jack, is a 15-month old Golden Retriever and is one of five dogs that FRK9 presented to Fairfax County Police Department in January 2019 as part of a new pilot program. The K9s respond to critical and/or traumatic incidents locally and also help officers to foster community relationships with trips to neighborhood schools and local events.

FRK9 Jack is one year into his two-year training period, but he suffers seizures from time to time, which limit his capacity to work. Unfortunately, the root cause is unknown; however, an MRI will provide a diagnosis and help vets create a treatment plan to help Jack return to normal.

Since starting his training, FRK9 Jack has already made a tremendous impact on the officers and people he comes into contact with. His handler, 2nd LT. Christopher Sharp, summed up FRK9 Jack’s significance to the team. He said: “I had FRK9 Jack for only three weeks when I responded as a Peer supervisor to a double murder-suicide critical incident. Officers from two stations responded to an active, fluid and chaotic scene. When the scene was finally under control and the responding officers and detectives were able to debrief at the station, it was there I saw how valuable the program was even in its infancy. I sat there and watched the officers interact with Jack, actively seek Jack out, and in doing so, emotionally decompress, even for those few minutes with him, and realized just how important it was to do everything we can to help our troops.”

President of FRK9 Matt Giese said: “FRK9 Jack has settled in well with the team at Fairfax County Police Department and we would like for him to continue helping the team without the disruptions caused by the seizures. Any donation amount will be greatly appreciated in helping us achieve our goal.”

FRK9 is seeking to raise $3,500 to offset the expenses of the MRI and treatment. Anyone can support the campaign with as little as $10 and upwards of $500. For further details or to back this campaign visit: https://charity.gofundme.com/donate/project/frk9-jacks-mri/frk9.