Reaching their communities with factual information about drugs, French and Belgian Scientologists back the drug prevention strategy of the 59th session of the Commission on Narcotic Drugs of the U.N. Office on Drugs and Crime 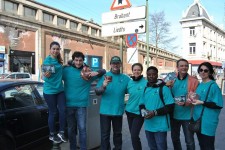 Belgium, April 14, 2016 (Newswire.com) - Volunteers from the “Dites Non à la Drogue” (Say No to Drugs) group of Belgium and the Non à la drogue, Oui à la Vie (No to Drugs, Yes to Life) group of France, with support from the Church of Scientology, joined forces to bring their campaign to Lille and Brussels in April.

They encourage other groups and individuals to join them in carrying out the strategy proposed in March by the 59th session of the Commission on Narcotic Drugs of the U.N. Office on Drugs and Crime: That Member States should take comprehensive preventive measures against illegal drug use looking at the problem from the perspective of the individual, the community and society as a whole, including interventions and public health.

Sixteen French and Belgian volunteers set up their booth in the square at Palais Rihour in Lille, France, last weekend distributing more than 6,000 copies of The Truth About Drugs booklets—handing them to individuals and setting up displays of the booklets in local shops.

They spoke to youth, pointing out information in The Truth About Drugs booklet on the dangerous consequences of consuming the most frequently abused drugs—cannabis and alcohol.

The following day, the volunteers moved their campaign to Rue de Brabant in Brussels, where they handed copies to shoppers and set up displays in more than 150 shops, bars and ice cream stands, distributing some 4,000 copies of their booklets that afternoon.

Comments from parents, teachers, managers and security and law enforcement officers showed concern with the consequences of drug abuse on the individual, family, businesses and society.

A heroin addict who was enrolled in a harm reduction program admitted to the volunteers that having access to “clean” heroin didn’t end her addiction and in fact it went from bad to worse.