Lisa Zimouche, the freestyle football legend has joined the dynamic female-led company, Queens Gaming Collective to continue to expand her presence in the U.S. with original content and brand integration 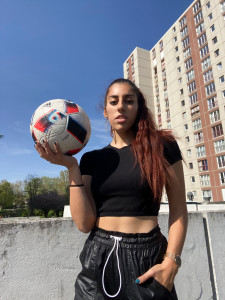 LOS ANGELES, June 16, 2021 (Newswire.com) - Queens Gaming Collective is proud to welcome Lisa Zimouche, aka Lisa Freestyle, to its roster of talented and inspiring female Twitch streamers, gamers, and influencers. The freestyle footballer has gained massive fame and social media influence for showcasing her 'nutmeg' skills in front of world-class athletes and celebrities across the globe. Now, she is working with Queens to expand her fan base into the gaming industry.

Zimouche is a pioneer of freestyle soccer (football), who started competing at 13 years old and became a winner in the 2014 World Female Panna Championship. She has accumulated more than 3.5M followers across social platforms and regularly performs globally at sports and cultural events as an active ambassador for brands, and executed content collaborations with sports and entertainment icons including Usain Bolt, Paul Pogba, Ronaldinho, Drake, and Major Lazer. As a Common Goal activist, she is committed to using her voice and sport to promote the values of equality, gender equity, safety, and empowerment for youth.

"Gender equality is so important to me because all throughout my career, I have had to compete against men to raise my profile in football - and the gaming industry is no different," says Lisa Zimouche. "Not only will Queens Gaming help professionally elevate my gaming passions and pursuits, but they will also provide me with a platform to continue inspiring young girls to go after their dreams."

Freestyle began her love for esports in 2007 with Mario Kart, a personal favorite, and FIFA followed by Need for Speed Undercover and Sims. Although she doesn't compete officially, what she loves about gaming most is that she competes with her friends regularly.

"This kind of casual gaming is what makes up a vast majority of players worldwide," says Queens Gaming Collective Co-Founder and CEO, Alisa Jacobs "This is precisely why our mission is important — to serve the 41% of female gamers of the 2.8 billion in total and not only amplify their voices but champion equality from within the industry."

Zimouche brings all facets of popular culture including fashion, style, fitness, and wellness to the world of sports. She has embarked on a major brand collaboration with companies such as Kia, L'oreal, Kellogg, Puma, and Red Bull. Queens will expand her reach within the gaming industry that includes creating content for Queens' most recent partnership LiveXLive, a music streaming platform, combining audio and video, across the web and via mobile apps and on OTT devices.

Launched in November 2020, Queens Gaming Collective is a women-led gaming lifestyle company that challenges the industry to up-level by bringing inclusion, diversity, and gender equity to the playing field. Queens changes the game by empowering its global roster of women creators, streamers, and competitors with much-needed infrastructure, resources, and representation that previously locked women out of the highest levels of competition. Queens aims to show the world: It's anyone's game.