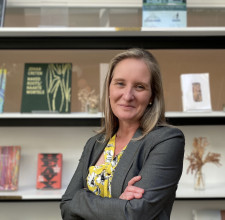 RALEIGH, N.C., September 14, 2021 (Newswire.com) - After celebrating two decades in the hospitality industry, Frederique Leonard, the CEO of Raleigh-based Plenty Hospitality Group, has been inducted into the prestigious Marquis Who's Who.

In her current executive position, Leonard has completely transformed the internal structure of her 120+ person team, including the hiring of all-new management and the implementation of a brand-new, robust human resources program, that includes comprehensive diversity and inclusion training and crisis management and support for all staff and their families. Additionally, she has implemented an entirely new operations and marketing strategy for both concepts to ensure a successful and innovative future for the restaurants and her staff.

"I've spent my entire adult life in the hospitality industry. It's all I know, and it's what I love," says Leonard. "As beautiful as this industry is, it's not without its flaws. Some of which I've experienced over the years, but I truly believe that the world of food and beverage has incredible potential to provide so many opportunities to those that dedicate themselves to it. And that's part of how I view my current role. I want to help create a space for anyone that's interested in getting into hospitality to feel safe, appreciated and inspired."

After receiving a bachelor's degree in Restaurant, Culinary and Catering Management from Vetal in France, one of the most prestigious culinary intuitions in the world, Leonard dove headfirst into the hospitality industry at the young age of 20. Over the next few years, she learned the ins and outs of the business, working nearly every industry job until 1997, when she and her business partner opened their own business, Ataché Culinarie, a catering and events company, and secured an exclusive partnership with the French Consulate in New York City.

As the co-owner and Director of Events, Leonard organized and catered some of New York's most exclusive, high-end events, launch parties and galas over the course of 15+ years. Following a short stint back in her hometown in France, Leonard was called upon to bring her talents back to the states, where she served as the General Manager, overseeing the opening of La Belle Helene Restaurant in Charlotte, NC, one of the largest authentic French brasserie's in the United States.

In 2019, her expertise was requested once again, this time in Raleigh-Durham, NC, where she helped open another two restaurant concepts and then served as the Director of Operations for a multi-unit hospitality group based in Chapel Hill, NC, before settling into her current position as the Chief Executive Officer of two of Raleigh's best and nationally recognized restaurants, Brewery Bhavana and Bida Manda.

Leonard plans to continue building on the continued success of both restaurants and is looking forward to leading the launch of a new restaurant concept in the near future.